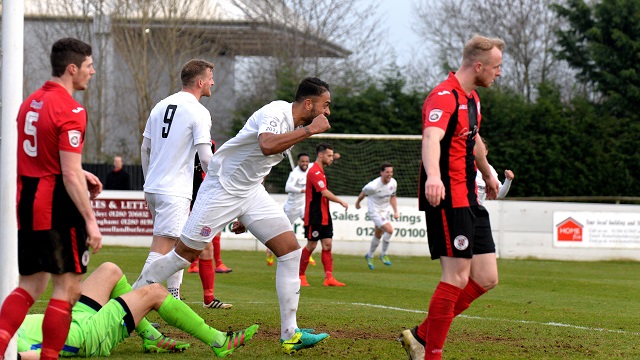 AFC Fylde centre-half Steve Williams is relishing his role as the experienced head in defence.

Injuries at the back have forced manager Dave Challinor to dip into the loan market and Williams is enjoying the responsibility of helping out his young teammates.

“Being the senior defender gives you responsibility, but you’ve got to use that in the best way. I try to talk to the lads along the backline as much as possible and help them through certain parts of the game.

“It’s a good feeling after the game when they’ve all done well and I enjoy the responsibility. I know that I’ve got to lead by example having played for a lot longer than the other lads in defence.

“We’ve had quite a few injuries recently so it’s a good opportunity for the new lads to come in and make their mark. I think they’ve done very well.

“Dan’s obviously got a lot of talent and potential and he’s very good on the ball. Laurence is younger still but he’s really fitting in well and doing a good job.

“Over the last couple of games, we’ve been getting to know each other and how each other plays and it’s been really positive so far.”

Williams admitted that his side haven’t been happy with their defensive record this season and last month’s 5-0 defeat at Salford City was a wake-up call.

“After the Salford game, we asked ourselves ‘Do we go under as a team or do we do something about it’.

“We got everyone together as a team and we talked about everything that we were doing across the board. That included training, preparing for games and individual things too and we just had to acknowledge the reality of it all.

“We’ve had to dig deep because we cannot afford to be losing games, especially in that manner and I think that has been reflected in the three performances since Salford.

“We went to Brackley having been beaten there last time around and we knew we would be up against it, but we were resilient and you could tell how much it meant to the players.

“We’ve been working in training on having a ‘kill or be killed mentality’ and that’s shown in the performances and I think that the manager will be pleased with that.”

Whilst his job primarily involves keeping the ball out of the net, Williams has enjoyed much success at the other end of the pitch this term.

His opening goal against Tamworth at the weekend was his seventh of an impressive campaign and the towering centre-half admits his has made a concerted effort to improve that side of his game.

“Obviously I’m pleased with scoring but I also need to keep them out of our net because our clean sheet record this season hasn’t been as good as we would have liked.

“However, we’re top of the league and that’s all that matters at this moment.”