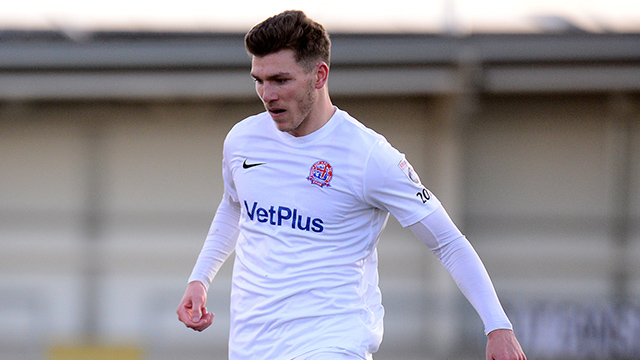 AFC Fylde defender Jordan Tunnicliffe is expecting a topsy-turvy climax to the season as the Coasters look to consolidate their position in the National League play-off places.

Fylde moved back into the top seven at the weekend with an impressive comeback victory over Dover Athletic and currently lead their south coast promotion rivals by a point, although Dave Challinor’s side have played an extra game.

With just ten games remaining in their debut season at this level, summer-signing Tunnicliffe admits he wouldn’t swap places with any of the clubs below, looking to knock Fylde off their play-off perch.

Tunnicliffe said: “We would rather have the points on the board than games in hand. There are still ten games to go and I’m sure it will chop and change quite a bit yet but hopefully we are one of the teams up there in the top seven come the end of the season.”

Despite falling a goal behind against Dover, on the back off consecutive league defeats, Tunnicliffe insists he never felt in trouble: “We always believe that we can score goals and that proved to be the case.

“Even when we went a goal down, we knew that the game would open up in the final 20 minutes.

“We stuck to the way we play, playing out from the back and down the channels and we got what we thoroughly deserved in the end.

“I didn’t really feel under much pressure and they didn’t create many chances but it was frustrating to concede the goal we did. We have been working in training to cut out those sloppy goals and that type of goal is exactly what we are trying to prevent.

“However, it’s how you come back from situations like that and I thought we did it brilliantly.

“The substitutions worked perfectly too and the two young lads changed the game.

“The manager always tells us to keep calm and continue what we are doing. We have to trust that and believe in our own ability for when the game opened up. When it did, we got three goals and we are delighted.”

The Coasters face an arduous trip down to Torquay at the weekend and Tunnicliffe is wary of the former Football League side despite their lowly league position.

Tunnicliffe added: “Every team has their strengths in this league, even the clubs down at the bottom, and they all present a different challenge. We have to show Torquay respect regardless of their league position because they are battling for their lives.

“We have a full week to prepare for the long trip and we have to make sure we come away with a positive result.”