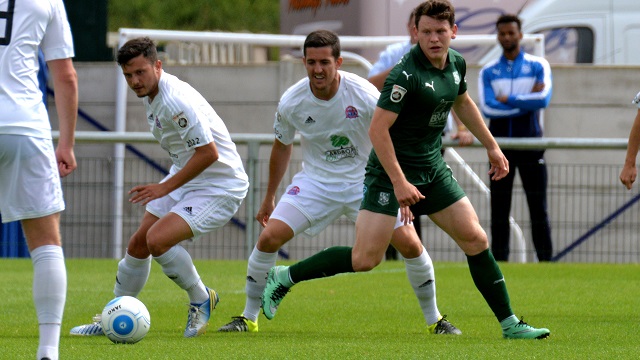 Tranmere an eye opener for Bondy

Midfield star Andy Bond believes the defeat against Tranmere Rovers at the weekend was an ‘eye opener’ for the AFC Fylde squad.

The Coasters suffered a 4-1 reverse at the hands of the National League side and Bond, who joined the club in the summer from League Two side Crawley Town, is well aware that his side must improve ahead of the big kick off against AFC Telford United this Saturday.

“Of course pre-season is more about fitness and performance rather than results. But that doesn’t mean we weren’t disappointed because we still want to win every game.

“Tranmere are at the level we are hoping to reach next season and it was a bit of an eye opener for us. We need to step it up and that needs to happen at the weekend when we kick off the season.

“Tranmere will be right up there in the Conference next year so we knew it would be tough but if we have aspirations of playing in that division too then we will need to compete better.

“We were taught a bit of a lesson and if that is where we are aiming for then we must improve.

“We have to go back to the basics and keep putting in the hard work. You have to be better than your man all over the pitch.

“Pre-season in general has been good for us so far. We have had some decent results and fitness levels are getting to where they should be but it can’t stop there. This is where the real hard work begins.”

The former Colchester United midfielder stepped back into defence at the weekend after Steve Williams limped off with a slight injury and the 30-year-old admits he is happy to fill in when called upon.

“It’s just good to be playing to be honest. I’ve loved it here since day one and the more minutes I can get under my belt the better so I’ll play anywhere.

“If the gaffer wants me to do a job at centre-half or in midfield then I’m happy to do that. It’s about the team at the end of the day and I’m comfortable in both positions so it’s no problem.”

Bond, who was named champion at the recent ‘Cassius Camps’ army style training day, now can’t wait for the campaign to start after a gruelling pre-season schedule.

“I knew I’d win it!” joked Bond. “That was another eye opener for us all. It was mental thing and they spent the whole day trying to break us but it’s all about getting the best out of people.

“I can’t wait for the season to get going now but we need to start as we mean to go on. I look forward to every game and I approach every game the same but we need to be winning matches right from the off if we want to gain promotion.”