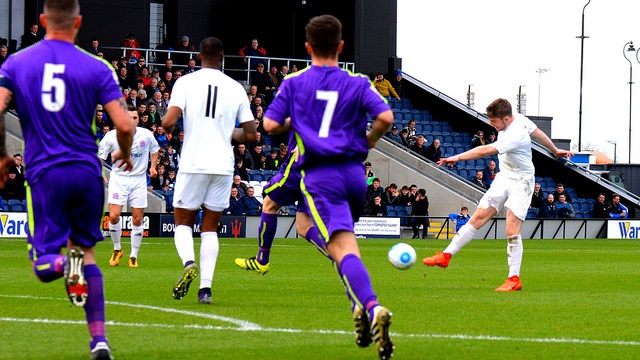 AFC Fylde star Sam Finley was delighted that his stunning strike helped the Coasters to a crucial 4-1 victory over Darlington.

The midfield ace missed three months of action with Ulcerative Colitis but has since been a mainstay in the middle of the park.

Fylde suffered their fifth defeat of the season away at Nuneaton Town ten days ago and Finley admitted manager Dave Challinor was looking for a reaction.

Second-placed Kidderminster Harriers’ 13-match winning streak at home came to an abrupt end on Saturday as the Coasters moved a huge nine points clear at the top of the National League North with just five games to play.

Finley said: “It was massively important to get a reaction after our defeat at Nuneaton. We had been training hard all week leading up to Saturday’s game and the gaffer had made it perfectly clear that the performance at Nuneaton wasn’t acceptable.

“We were five wins from winning the league ahead of the game and we had a point to prove. We did our job and Halifax did us a favour against Kiddy so now it’s down to three wins.

“That said, we won’t be looking at the fixtures for three games to win, we will be just trying to win every game.

“We heard the fans cheer towards the end of the game so we knew something had happened elsewhere and then we came into the changing room and Kiddy had lost so it was buzzing in there.

“We still have to go to Halifax soon though so we have to keep our focus.”

Finley’s wondergoal set the Coasters on their way to a big win against Darlington and the midfield man admits he is delighted to be back in the thick of the action.

“It was very similar to my goal in the play-offs against Harrogate last year. The ball came across my body and I just struck it really well on the half volley.

“The keeper might have got the faintest of touches to make it look even better but I was very happy with the strike. You know when you hit them sometimes then they going to have a chance and luckily it flew into the top corner.

“I thought we played really well in the first half and we probably should have been further ahead than we were. However, we went out and did a professional job in the second half and they simply couldn’t cope with us.

“Their goal to make it 2-1 gave their fans a massive lift so to get our third so soon after was a huge moment in the game. Hughesy did well to drive inside and played a great little ball through to Dan Bradley who tucked it away.

“On a personal level, I’m made up to be back playing. I still don’t feel quite 100 per cent match fit and I need to get my sharpness back, but after being out for three months it’s so good to be back out there.”