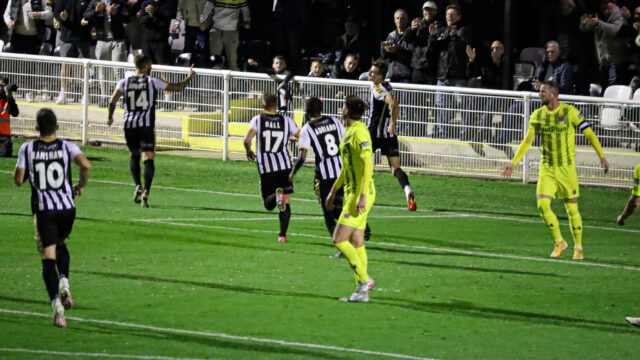 Glen Taylor’s first-half penalty edged the Coasters out of the FA Cup at the Brewery Field on Tuesday evening.

After Dan Pike was adjudged to have brought down Jamie Chandler after 25 minutes, Spennymoor’s hit man Glen Taylor stepped up and slotted home the penalty to punish Jim Bentley’s side, who struggled to find their usual rhythm throughout the game.

Bentley made three changes to the side that started in Saturday’s 1-1 draw at Mill Farm, bringing Liam Nolan, Ethan Walker and Jordan Hulme in for David Perkins, Jacob Holland-Wilkinson and Jack Sampson. Meanwhile, Tommy Miller opted to field an unchanged eleven.

The first chance of the game fell the way of free scoring Rob Ramshaw, but the striker’s effort was too high to trouble Fylde stopper Chris Neal.

Following the opening chance, the home side created a flurry of chances. Ramshaw saw a header fly just over the crossbar, before Glen Taylor and Brad Abbott were inches away from breaking the deadlock.

The deadline was eventually broken mid-way through the first half. Full-back Dan Pike’s attempt to recover and win the ball from Jamie Chandler was deemed to be mistimed by the referee, and up stepped Glen Taylor who calmly slotted past Neal.

Moments later, it was almost 2-0, as James Curtis met a corner and headed just over the crossbar from six-yards out.

Taylor tried his luck again, striking a left-footed volley towards the bottom corner, which Neal managed to get down and palm to safety.

Pumped up from the half-time team talk, Fylde started brightly after the interval as they searched for a route back into the game.

On 51 minutes, Ben Tollitt was gifted Fylde’s best chance of the game. The winger found himself with time and space inside the six-yard area and volleyed towards the top corner, but Eve somehow managed to get a fingertip to it and divert the ball round the post for a corner.

Stephen Dobbie was brought on in place of the injured Luke Joyce, and it was he who went close with a drilled effort on 53 minutes, after picking up Ethan Walker’s over hit cross.

Spennymoor’s best chance of the second period came through Taylor, who out-jumped Whitmore inside the six-yard box but glanced his powerful header off target.

Just before the hour mark, Joe Tait and Eve were involved in a defensive mix-up that allowed Tollitt a free effort at goal, but he was unable to direct his volley into the open net from a tight angle.

Continued pressure from the home side saw defender Tait – who impressed alongside James Curtis on the night – head narrowly over the bar.

And in the dying embers of the game, Tollitt and debutant Ethan Walker had strikes at goal, but the resilient Moors threw bodies in front of the ball.