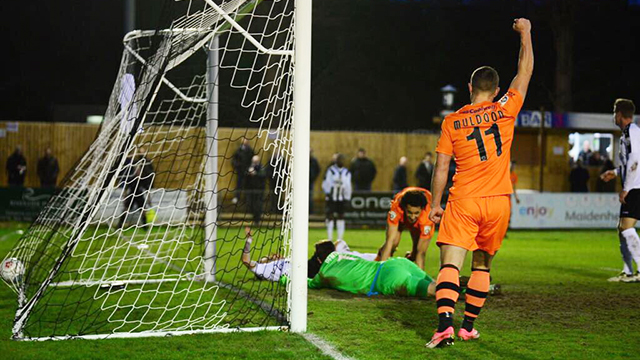 Ten man AFC Fylde came from behind to secure a huge three points on the road at Maidenhead United.

Harry Pritchard had opened the scoring for the hosts on half-time, however second half goals from Lewis Montrose and Jack Muldoon earned the Coasters a first win in six.

Dave Challinor made two changes to the side that was beaten at Tranmere on Boxing Day with Sam Finley returning in the place of Jason Taylor and Matt Blinkhorn in for Serhat Tasdemir.

After a slow start to proceedings – coupled with a pre-match power outage – Remy Clerima almost lit up a dull York Road when he nicked the ball past Lewis Montrose’s hopeful challenge before playing a delayed one-two with Harold Odametey and firing his first time effort tamely at Jay Lynch.

Magpies midfielder Pritchard headed narrowly wide as the hosts began to take the game to their opponents.

How the Coasters didn’t open the scoring on 20 minutes remains a mystery. Danny Rowe let fly with a thunderbolt from 25 yards that crashed back off the crossbar, straight into the path of Jordan Richards who saw his shot saved before Sam Finley’s powerful effort was somehow blocked on the line by Jake Goodman.

Lewis Montrose eyes lit up when the ball dropped to him six yards out after Carl Pentney spilled, however his improvised back-heeled was hacked of the line.

Moses Emmanuel tested Lynch up at the other end after Odametey’s header reached the back post, but the Fylde stopper was equal to the midfielder’s left-footed strike from the angle.

Odametey was causing real problems going forward for Maidenhead and was a whisker from finding the top corner on the half hour when he took aim from 20 yards.

A quick breakaway from the visitors saw Finley lift the ball over his man before playing in Jonny Smith who flashed a strike across goal and narrowly wide.

Then, on the stroke of half-time, the hosts took the lead. George Edmundson’s clumsy tackle on Emmanuel was deemed a penalty by referee Samuel Allison and Pritchard stepped up to stroke the spot-kick down the centre of the goal.

Zaine Francis-Angol’s last ditch challenge prevented the home side from doubling their advantage shortly after the break when he took the ball off Emmanuel’s foot as the midfielder looked certain to score from eight yards.

A moment of individual brilliance from Smith went close to bringing the scores level. The winger received the ball with his back to goal before beating two men whilst racing into the area, however his eventual strike was straight at Pentney.

Rowe, aiming to fire himself back to the top of the league’s goal charts, took aim with an ambitious long range free kick that Pentney was pleased to see drift wide.

The Coasters were looking more likely as the half wore on and only a sensational stop from Pentney denied Jordan Tunnicliffe an equaliser from point blank range.

The long awaited goal finally arrived on 71 minutes. Smith’s corner was headed goalwards by Tunnicliffe and although the keeper made another smart save, the rebound was poked over the line by Montrose.

Rowe’s shot count continued to rise, however he was once again off target as his stinging effort from the left whizzed wide of the near post.

The turnaround was complete inside the final ten minutes when substitute Jack Muldoon put the Coasters ahead. Rowe flicked the ball over his marker to Muldoon, who took a touch before unleashing from 20 yards into the bottom corner.

The afternoon was to turn sour yet again for captain Finley when he was given his marching order for the second game in succession. Despite appearing to win a challenge cleanly, the midfielder was shown a second yellow card leaving the Coasters to play out the final moments with ten men.