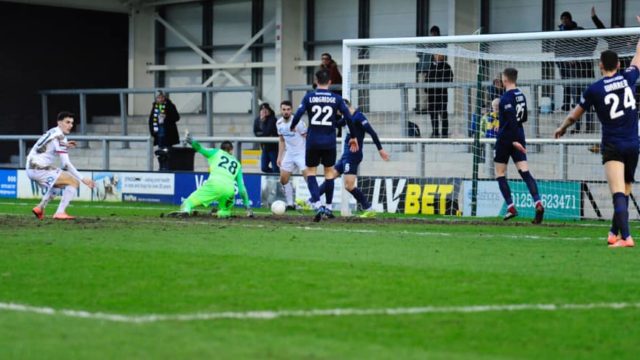 The Coasters were overturned by a clinical Torquay side at Mill Farm, after Tom Walker opened his account on his debut.

Torquay started quickly, with a corner almost turned home by defender Joe Lewis, but it was safely over Sam Hornby’s bar in the end.

The Coasters grew into the game, with new signing Tom Walker working hard on the left hand side.

The first opportunity came when Danny Philliskirk caught an effort fully on the volley, but it wound just wide of Lucas Couolan’s goal.

The game burst into life shortly after, with Fylde’s new signing announcing himself in the best way possible.

Tom Walker burst down the left hand side, darted in, before firing a sublime effort from the edge of the box and in off the post, giving the keeper no chance.

Jordan Williams raced through in a similar position shortly after but couldn’t produce the same finish and add a quick second.

Soon after though, the Gulls were level, as a corner landed perfectly for captain Asa Hall – who expertly steered a header into the bottom left corner.

Torquay were boosted in confidence, and looked to get top scorer Jamie Reid involved, and add to his tally of 17 goals.

Neil Byrne came close after stepping out of defence on an incredible run, but fired his left footed shot from distance just over the bar.

The Gulls soon took the lead, as a deflected clearance fell kindly to Jamie Reid, who took a touch and fired home emphatically.

It was what Torquay had deserved for their positive first half, and Fylde now found themselves having to come from behind.

The final act of the first half saw Joe Lewis wrap an inviting cross into the box which skidded across the face of goal, but fortunately for Fylde, there was no one to turn it goal wards.

The visitors started well once again, but Fylde looked potent on the break.

Dan Bradley’s effort deflected out to Jordan Williams who did well to pick out Tom Walker in the box, but his effort from close range was hacked clear off the line.

Torquay United soon had a crucial third, as Jamie Reid’s snapshot could only be palmed back into the box – with Ben Whitfield alive to prod home the rebound, and edge the Gulls closer to three points.

The pitch was showing wear, and increasingly favoured teams on the break – with Nick Haughton snatching at Taylor’s cross, but could only watch it bounce over.

Moments after, Luke Burke had a speculative effort from distance which he caught well, but crept wide of the post.

Changes soon followed, with Taylor and Willoughby joining the action – as the Coasters chased a way back into the game with a more attacking formation.

It seemed to open up more space, as a cross into the box deflected into the path of Dan Bradley – but he rushed his effort and fired it wide under little pressure.

Bradley soon made amends for the miss though with some fantastic wide play, firing a brilliant cross into the box, which Jordan Williams was alert to, and volleyed home.

This set up a grandstand finish for the Coasters, with caution thrown to the wind – and a free-kick won 25 yards from goal.

Walker couldn’t bend this one into the top corner like he did just two weeks earlier, and Torquay could breathe.

Six minutes added time went up, and the Coasters burst into life, Willoughby being a nuisance in the box, and forcing Covolan into a smart stop.

It was too little too late though for the Coasters, and Torquay headed home with a crucial three points.