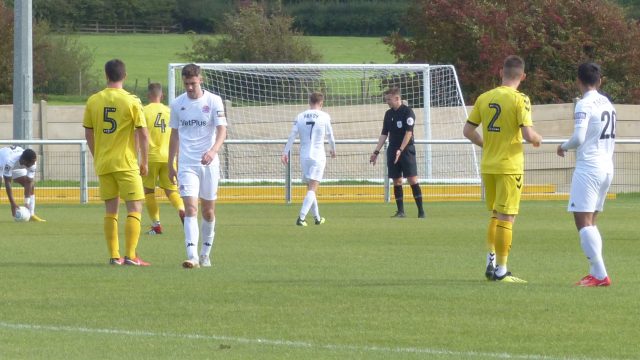 Earlier today AFC Fylde lost 3-1 to League One side Fleetwood Town in the 1st Round of the Lancashire FA Senior Cup.

The first shot of the match came in the 8th minute as James Hardy’s effort forced England U19 goalkeeper Billy Crellin into his first save of the match.

The opening goal of the game came from a corner which was at first dealt with by the Coasters, the clearance was deflected and found its way to Ged Garner who made it 1-0.

Towards the end of the half Hardy tried his luck once more, his effort from outside the area forced a brilliant save from Crellin who parried the ball out.

The resulting corner provided Fylde with their best chance of the half with the ball someone finding its way through to full-back Arlen Birch whose effort struck the post.

As the second half progressed the visitors began to take control and doubled their lead on the 60th minute as Crellin’s long kick was met by a trialist who finished well past Russ Griffiths.

Former Blackpool midfielder Bobby Grant then made it 3-0 in the 73rd minute as the League One side began to control the game in the latter stages.

In the final minutes, the Coasters gave themselves a glimmer of hope as Ashley Hemmings dangerous corner was forced into his own net by Lewis Baines to make the score 1-3.

The scores stayed the same throughout the final 4 minutes added on with the result seeing AFC Fylde exit the Lancashire FA Senior Cup.