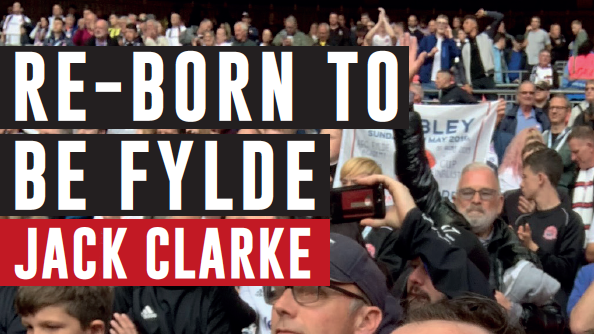 Re-Born To Be Fylde | Jack Clarke

‘Re-Born To Be Fylde’ is a feature in our match day programme, where we get to know you, the supporters, a bit better!

Taking a look back on the series throughout the season, we want to share the thoughts of Jack Clarke.

How did you come to support AFC Fylde?

Being a local lad I’ve always been interested in the local team and thought I’d see what it’s all about. I started attending more regularly last season and haven’t really looked back, the spirit and the long term goals of the club are ace and it’s great to get behind what’s happening in your local community.

Do you/did you support another team?

Back when I was a child I used to support Manchester United, I use the term support loosely because as a kid I was never massively into football but went to a couple of games. What was your first game and how did it hook you? I went to a few games when we first moved up to Mill Farm but I’d say the game that got me hooked was against Aldershot last season, I loved the atmosphere of the ground and ever since I’ve been to every home game I can and a couple away.

My pre-match routine usually starts off early with a big breakfast in the local pub before slowly making our way up to the ground, stopping off in Bradleys for a Jager or two (it’s a bit of a tradition, we won’t win otherwise) before heading to the stands.

What’s your favourite thing about supporting the Coasters?

My favourite thing about supporting the coasters is the atmosphere in the east terrace. Even if it’s wet and windy on Tuesday night, everybody gets behind the players and makes as much noise as possible. Nothing compares to being so close to the pitch, having a good sing-along and really being able to get stuck into the game.

What’s been your best day as a Fylde fan?

I’d say my best day would have to be our FA Trophy win at Wembley. I’d never been to the stadium before and to watch Fylde bring it home in that massive venue was something I’ll never forget.

Which goal sent you the craziest of all the ones you’ve seen?

I enjoy my pre-match routine a bit too much so trying to remember a specific goal is hard, but for me it’s got to tie in to the previous question and be Rowe’s free kick at Wembley, it was picture perfect and the crowd was mental.

Who do you see as our biggest rivals?

It’s got to be Stockport County, after the battle we had last season with the trophy. Now they’re in our league it would be great to see us promoted before them!

Who is your favourite all time Coasters player?

I’ve got to say my all-time favourite has been Jay Lynch, I think he was a fundamental part of how well we did last season. He seemed to fight off everything that came to him!