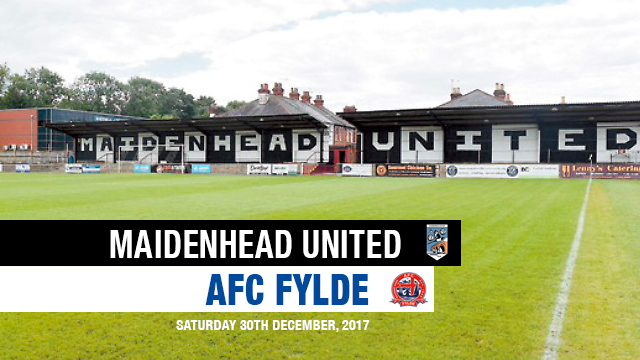 AFC Fylde are back on the road this weekend with a long trip to Maidenhead United.

The Coasters have enjoyed success on their travels down south this season with victories over Leyton Orient and Dover Athletic, whilst taking points from trips to Eastleigh and Ebbsfleet United.

Last time out, Dave Challinor’s side were beaten 4-1 by a clinical Tranmere side, despite registering far more attempts on goal than their opponents.

On loan winger Jonny Smith was on the scoresheet at Prenton Park, bagging his fourth goal of the season.

Tomorrow’s hosts Maidenhead have been on an impressive run of late with just one defeat in their last eight games in all competitions.

Alan Devonshire’s side have conceded just twice in their last five outings and currently sit 11th in the National League table with 37 points.

Ten man AFC Fylde suffered their first defeat of the season at the hands of a Dave Tarpey-inspired Maidenhead United back in August.

The United centre-forward netted an incredible four goals, including two penalties, after Fylde were forced to play a man light for the majority of the game following Josh Langley’s dismissal.

Lewis Montrose had given the Coasters hope of the stroke of half-time after Tarpey’s first half penalties, however the night would belong to the Magpies frontman who went on to add a fine individual strike and a stunning set-piece to claim the points.

Team news:
Midfielder Sam Finley is available for selection this weekend after missing the trip to Tranmere due to suspension. James Hardy and Henry Jones remain on the sidelines through injury whilst Andy Mangan has return to Tranmere Rovers after his loan deal expired.