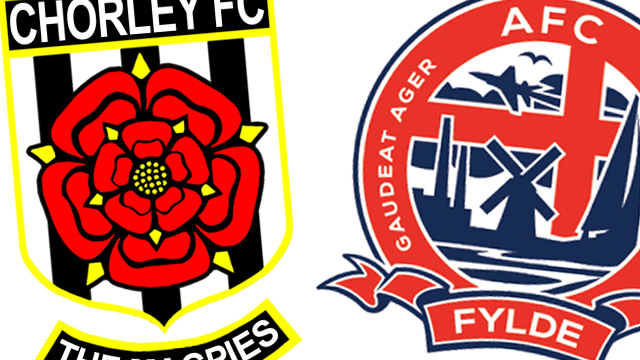 AFC Fylde will be hoping to complete a league double over local rivals Chorley tomorrow evening.

The original fixture at Victory Park was scheduled for Boxing Day, but horrendous weather conditions and a waterlogged pitch resulted in a postponement.

The two sides didn’t have to wait long to face each other however as Chorley travelled to Kellamergh Park for the first match of the new year.

Chorley almost got off to the perfect start when they were awarded an early penalty, but former Fylde frontman James Dean blasted his spot-kick over the bar.

The Magpies were made to rue their glorious missed opportunity as Coasters’ top scorer Danny Rowe slammed home the winner in the final minutes of the match.

Fylde have lost just one of their six games in 2016, winning the other five. Dave Challinor’s side bounced back from the solitary defeat against Worcester City last weekend with a hard-fought 2-1 victory at AFC Telford on Saturday.

However, Danny Lloyd was played in on goal towards the end of the first-half and he finished with aplomb to secure the points with his 50th goal for the club.

Challinor’s side will go into tomorrow evening’s match full of confidence considering their fantastic form away from home this season. The Coasters have won nine of their 12 league matches on the road so far this term – the last away defeat coming at North Ferriby United in mid-November.

Chorley have slipped down the table recently and currently find themselves in 13th position – 14 points off the play-offs.

Matt Jansen’s side looked to be collecting all three points at the weekend against Tamworth, but an equaliser three minutes from time has perhaps all but ended their promotion hopes.

The Magpies have won just once since the turn of the year – a 3-0 victory over Corby Town.

(Matty Hughes in action against Telford at the weekend)

There is limited match day parking available at Victory Park, with the club also utilising the neighbouring primary school

The cost of parking within the club controlled area is £3 per car per game. Priority is given to club staff and officials, matchday officials, visiting team, disabled badge holders (no charge) and car park season ticket holders. All other parking is allocated on a ‘first come first served’ basis.

The Chorley Group Victory Park Stadium is situated just to the south of the town centre and is easily accessible by public transport. If you are heading to the ground using a SATNAV type in PR7 3DU.

Leave motorway and head toward Wrightington.

Carry on along here (road changes to Pepper Lane) to end and turn left onto Preston Road (A49) and head toward Coppull.

Follow signs for Chorley onto Spendmore Lane at first round-a-bout.

Just after the Plough Inn, turn right into Duke Street, then third right (after School) into Ashby Street.

Ground is on the right.

Leave motorway and follow signs toward Chorley town centre along A6.

At the two round-a-bouts by B&Q, head across the first then the right exit at the immediate next.

Go straight across the next 6 (six) round-a-bouts until you pass between Morrison’s and the Ford garage.

You will then arrive at the final round-a-bout with the Eagle Hotel in view.

Then take the second left into Ashby Street.

Ground is on the right.