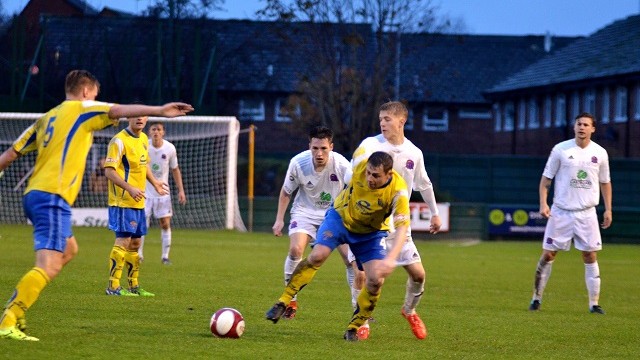 AFC Fylde face Skelmersdale United in the FA Trophy tomorrow night with a place in the second round and a trip to Eastbourne Borough up for grabs.

The original tie, due to be played at the weekend, was called off due to awful weather conditions.

The Coasters secured their place in the first round with a 2-0 victory over Warrington Town, whilst Skelmersdale beat Chorley after a thrilling 5-2 replay.

Manager Dave Challinor is hoping to have a few players back from injury for the match.

“Danny Lloyd has a dead leg, but we are hoping he is available. Josh Wilson has had the cast on his broken hand changed so he will be able to join in training a bit more.

“Tom Hannigan is still in discomfort with his knee so we are battling away to get him ready, whilst Adam Sumner has been back in training, we just need to up that now and he will be back to full fitness soon.

“Alex Marrow has missed the last two games with a calf strain and he hasn’t trained so we will assess him and Alex Whittle had flu last the week, but we are hopeful that he will be okay.

“Richie Baker had an operation on his nose last week, so he is a bit sore and he will be wearing his mask for the next few games.”

>Pick up a match programme on sale inside the ground. This week’s edition is just £2 and includes an exclusive player interviews, plus many other exciting features on both AFC Fylde and our visitors. Also available is the match day 50/50 which is growing in value by the week and gives you the chance to win a big cash prize!