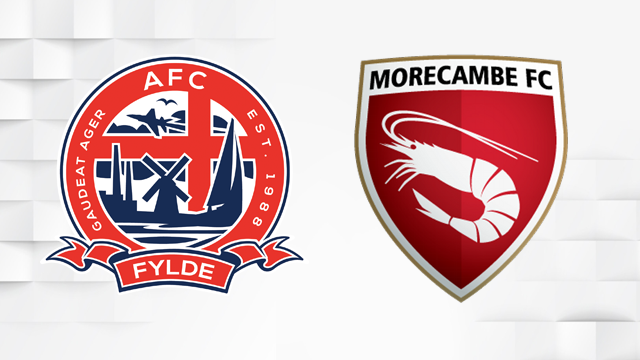 AFC Fylde host League Two side Morecambe tonight in the final home friendly ahead of the 2017/18 National League season.

Morecambe become the third Football League club to visit Mill Farm over the past fortnight following visits from Rochdale and Bolton Wanderers.

Rochdale came away with a narrow 1-0 victory courtesy of Steve Davies’ sublime set-piece, whilst Championship new boys Bolton had to settle for a goalless draw after a defensive masterclass from the Coasters.

Bolton had their chances a week ago but it was Fylde that could have nicked it at the death when midfielder Dan Bradley rattled the post from distance.

Tonight’s visitors Morecambe, managed by Jim Bentley, have endured a mixed pre-season with two victories and two defeats from their opening four matches.

The Shrimps kicked off with a 2-1 win over Bamber Bridge before seeing off local rivals Lancaster City by a single goal.

However, they have fared less well against league sides, suffering a 2-0 home defeat against Preston North End and a 2-1 reverse against Blackburn Rovers last time out.

After tonight’s game, Morecambe will complete their pre-season schedule against Rochdale at the weekend before their opening League Two match of the new season against Cheltenham Town.

Fylde manager Dave Challinor could shuffle his pack once more as he works towards the season opener next weekend and admits that places are still up for grabs.

Challinor said: “The game will probably see a more settled side. Some players need games more than others and we will have to take that into consideration, but we would be wrong not to have one eye on that first game of the season.

“We will look at different combinations but there are certainly still places up for grabs. Players have to force themselves into our plans and make sure they produce in every game and training session to make our job as difficult as possible.”

Challinor’s side start the new National League season on Saturday 5th August against Boreham Wood at Mill Farm, before travelling to Chester three days later for the first away game.

Get tickets with the click of a button right here