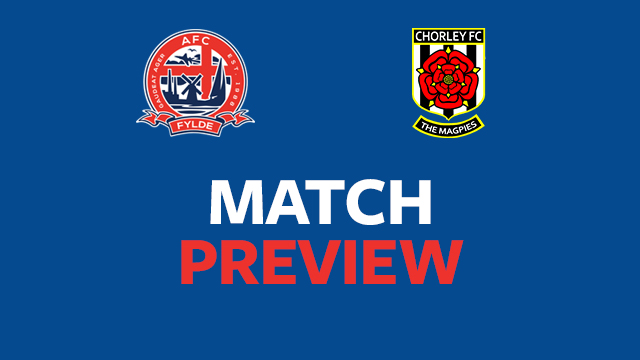 The scheduled away trip on Boxing Day was called off to the torrential rain, but hopefully the weather holds up and the two sides can renew acquaintances on Saturday at Kellamergh Park.

The Coasters have suffered more than their fair share of injuries this season and lost their second league game in succession on Monday with five first team players missing.

Dave Challinor’s side led Curzon Ashton 1-0 at the break last time out, but a second-half comeback coupled with defeat against Solihull Moors earlier in the month has seen them slip to fifth in the table.

However, just five points separate the top six teams going into the new year and Fylde have games in hand on all but one, including three on league leaders Nuneaton Town, who take on Solihull Moors in a top of the table clash.

Chorley have endured a stop-start season and currently sit in 11th place in the table, 11 points outside the play-offs, however manager Matt Jansen believes they can close the gap: “I want to win every game I go into – that is the same mentality I had as a player.

“In 2016 my aim is still to get into the play offs. We can really be a strong force in this league and my aim is the play-offs and ultimately promotion.”

The Magpies come to Kellamergh Park in confident mood after finishing the year in style with an impressive 4-2 victory away at high-flying Harrogate Town.

Coasters manager Dave Challinor said: “Chorley have found it quite tough this season and results have been inconsistent, but they have shown that anyone can beat anyone in this league, beating Harrogate away on Monday.

“They can be a match for any side in the division and I think that is the case for most teams in the league. Top can beat bottom and vice-versa on any given day so you have to be right at it in every game.”

Supporters will be boosted by the news that Tom Hannigan, Richie Baker and Danny Lloyd were all back in full training this week and could feature on Saturday, however the game comes a week too early for Matty Hughes. Brad Barnes may still be missing for personal reasons.