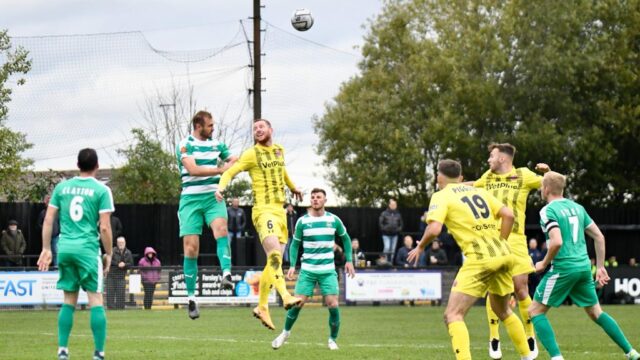 The Coasters fell to their first defeat of the season against Farsley Celtic at The Citadel, meaning a nine-game unbeaten league run came to an end.

James Hanson’s early opener turned out to be the winning goal after he lifted the ball over Chris Neal just seven minutes in.

Jim Bentley made one change to his side from last Saturday’s victory against Gloucester City, with Nathan Shaw coming into the starting XI to replace Ethan Walker.

The hosts started the brighter of the two sides, and with just seven minutes on the clock, they made the pressure count when a mix up in the Coasters defence led to Hanson lifting the ball over an onrushing Neal.

Farsley grew in confidence after the goal, and that led to Will Hayhurst being fouled by Nathan Shaw on the edge of the Fylde area. Jordan Richards took the free-kick, which Neal held well.

Jim Bentley’s side looked to impose themselves on the game, and that led to Luke Conlan whipping a cross in towards Nick Haughton, who headed over from close range.

A fine passing move eventually worked its way to Danny Philliskirk out wide. He then fizzed a ball across the face of goal for what looked to be a certain reply, but he fired over, though the flag was up for offside.

Again, the Coasters looked to have scored after Harry Wright spilt the ball inside the six-yard box where Piggott was there following up on the rebound, but the ball stayed out.

Moments before the break, Piggott was dragged down in the area, though the referee waved away any protests from the Coasters.

The half-time interval allowed the Coasters to regroup, and Bentley’s men came out on the front foot looking for an equaliser.

However, the first chance of the half fell for the hosts when James Hanson met a cross from the left and headed towards the bottom corner, though Neal was equal to it, getting down well to deny him.

Danny Philliskirk was the first player into the book for a foul on the halfway line, and moments later, after Whitmore was elbowed by Hanson, Philliskirk was given his marching orders by the referee for a question he asked.

As the Coasters pushed to get themselves back into the game, which resulted in an end-to-end affair, Dave Syers nearly doubled Farsley’s lead with a strike that whistled inches past the far post.

Second-half substitute Luke Parkin went close four minutes from time after he worked the ball onto his right foot and tested Neal, but another fantastic save gave Fylde a glimmer of hope going into the final few minutes of the game.

That glimmer looked to have come when Nick Haughton drew three players in, weaved his way towards the 18-yard box and fed Luke Conlan the ball out wide.

He opted for a first time cross to the back post but saw the ball run out for a goal kick, meaning the Coasters left West Yorkshire with their first defeat of the National League North Season.