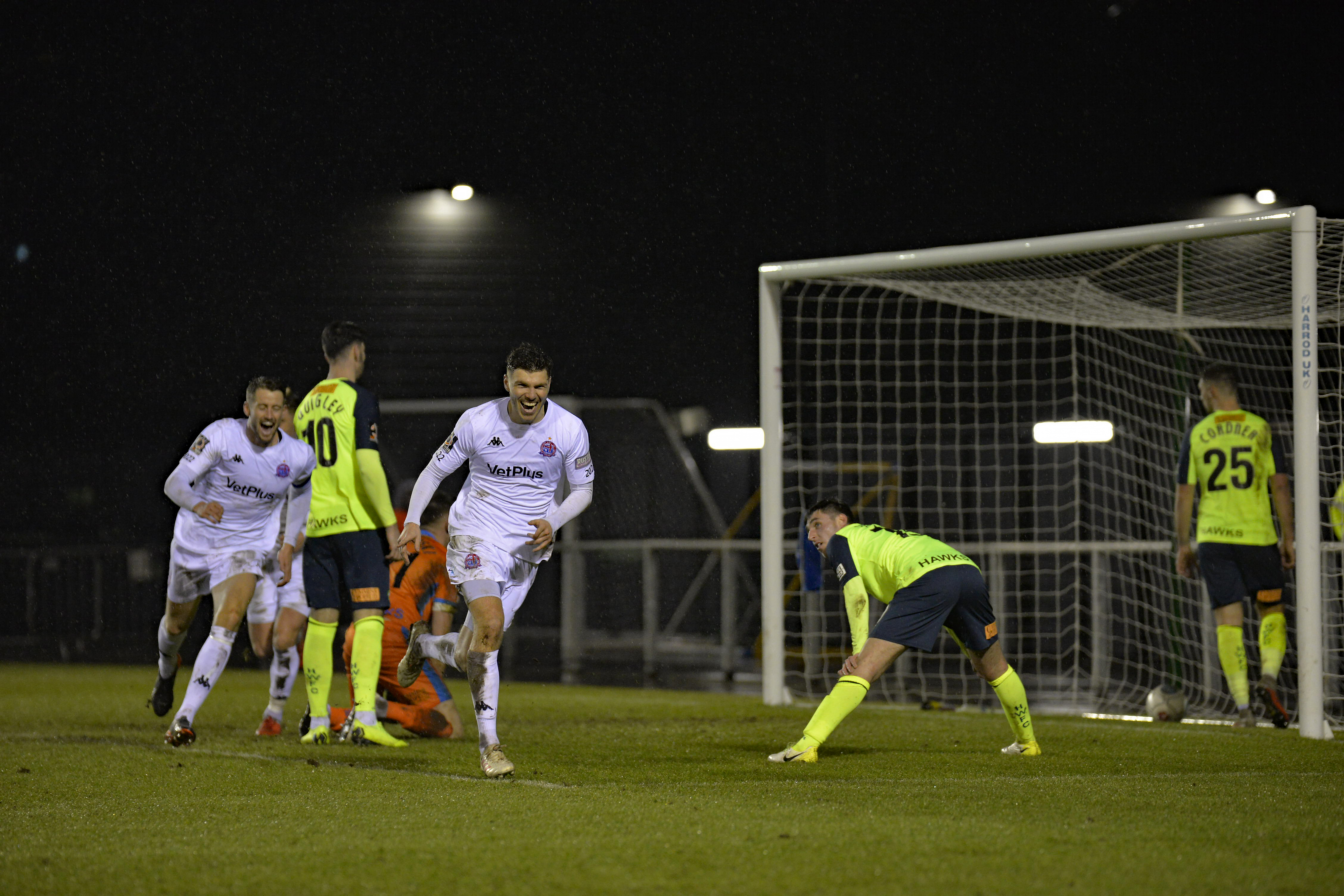 Fylde bounced back from Saturday’s home defeat to Chesterfield with a memorable display against a struggling Havant & Waterlooville FC.

Fylde made three changes with Birch, Bond and Crawford coming in for Odusina, Philliskirk and Hemmings.

The Hawks came to Mill Farm aiming to earn much needed three points to jump out of the bottom four.

The first half saw a strong, dominant Coasters side who were unlucky to concede before scoring.

Fylde were energetic and steady in keeping possession instead of looking to be direct, which was Havant’s initial response to Fylde’s start.

The dangerous play came from The Coasters in minute four from a Nick Haughton effort, testing Dudzinski for the first time in the game.

This saw Havant grow into the game with Patterson being a constant worry for Fylde’s defence, being brought down several times due to his sharp movement.

Then, in the fourteenth minute, Patterson was played through, and judged to have been brought down by Lynch inside the box.

The controversial penalty was neatly slotted into the bottom right corner by Patterson himself, giving the hardened travelling fans a reward.

The Coasters came back into the game after a wonderful piece of footwork from Francis-Angol lead to a clearance from his cross, where Rowe’s missed response led to a long-range shot from Croasdale, deflected by a Havant defender, looping over Dudzinski and in.

The final goal of the half came as it drew to  close, after a left-side corner was curled inwards by Haughton to find man of the match Tunnicliffe, who headed it in just before the final whistle. 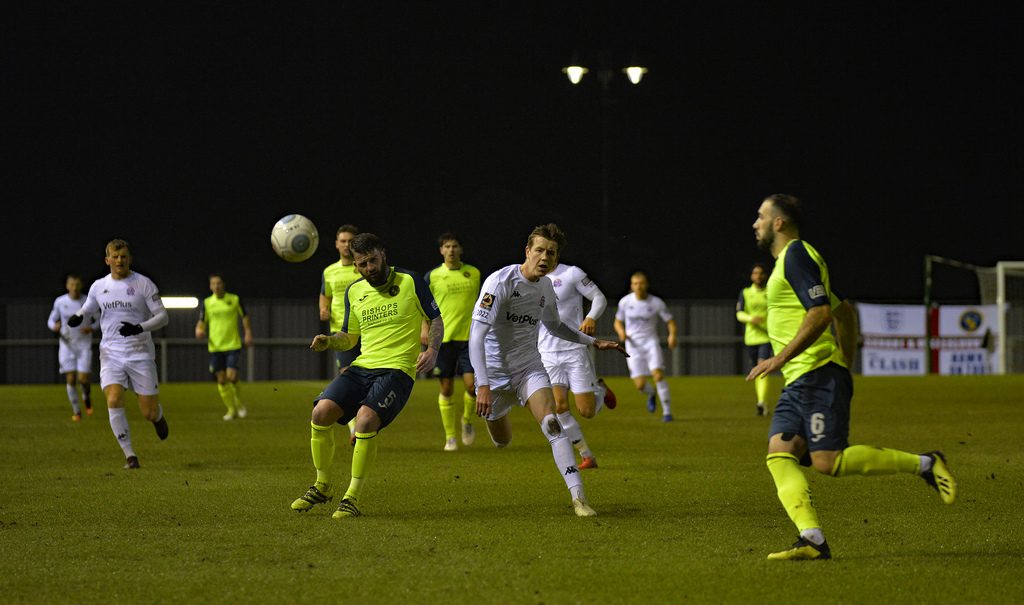 The second half saw the return of a strong and motivated AFC Fylde side, and a harmless Havant & Waterlooville.

The beginning of Fylde’s run of goals came from a brilliantly played ball from Crawford, penetrating Havant’s defence to find Rowe – who tricked Havant’s defender with a turn and curled the ball into the back of the net.

Havant hoped for a change to the flow of the match with a double substitution, bringing on Rutherford and Quigley replacing Paul and Harris.

However, AFC Fylde maintained authority and increased their advantage from a powerful Rowe free kick, followed by two rebounds, before Tunnicliffe finally slotted it in for his brace. 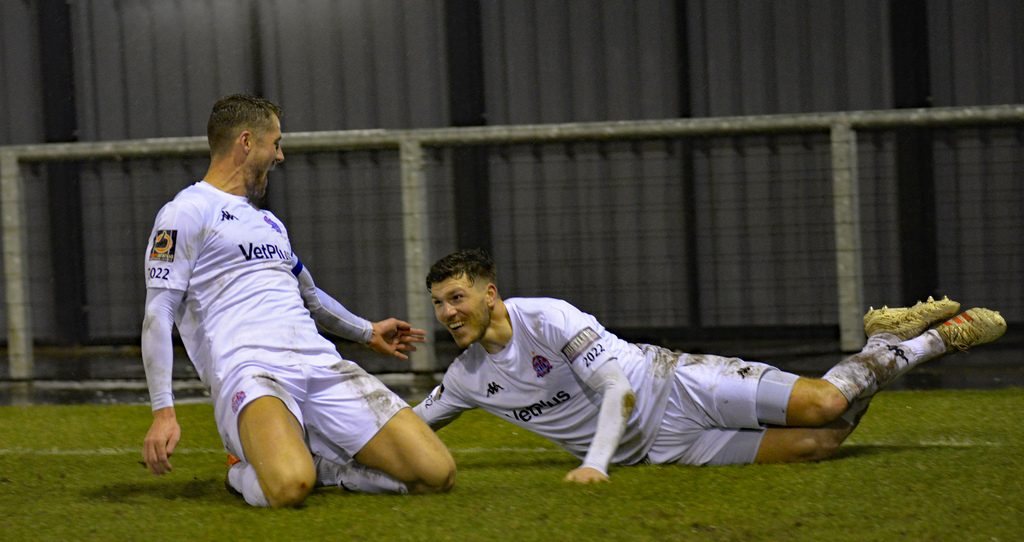 After a threatening breakaway from pacey Dan Bradley, recent signing Alex Reid was brought on to replace Rowe, with one eye perhaps on Saturday’s tie against Barnet.

This was then followed by a fantastic goal from Crawford. A precise cross from Birch found Crawford in the box who leapt to head it into the bottom left of Dudzinski’s goal – unreachable for the Havant keeper.

AFC Fylde final substitution saw Hemmings brought on to replace Bradley, one of Fylde’s key players of the night.

This change showed immediate promise, as a Hemmings build up play from the right found Reid in the middle who set it to an oncoming Tasdemir for a wonderful strike from the edge of the box, going straight into the top corner.

However, this was then called offside as Reid was just slightly over the line.

Against the run of play, Havant then managed to scrape up an 88th minute goal as Havant’s top scorer Rutherford tapped the ball in for a goal, following a clash with Jay Lynch.

The final goal of a thrilling night came from a Tasdemir run, cutting inside from the left to set Hemmings for a powerful shot to the bottom right corner.

Dave Challinor stated that despite a similar start in terms of result as last Saturday’s match, Fylde’s performance deserved to be acclaimed.

“We started really brightly, we’d spoken about playing with freedom and belief and to get two goals on the backhand of the first half pleasing.”

“It gave us the belief just to go and win the game in the second half which we did fantastically well.”

“Today we’d spoken about being open, moving the ball quickly, getting bodies forward, get the ball to good areas and play with sharpness and I thought we did that really well.”