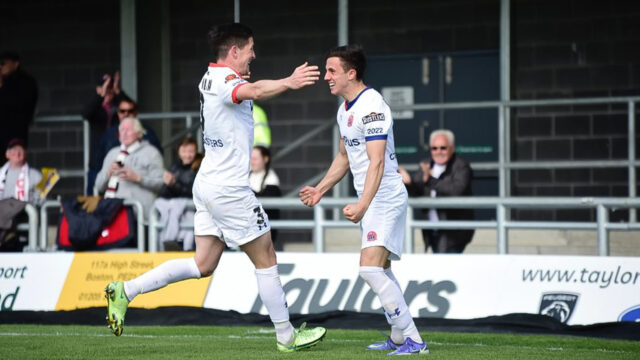 A Sam Osborne double manufactured a superb win for the Coasters against play-off chasing Boston United at the Jakemans Community Stadium.

Jake Wright JNR got the hosts off to the perfect start after a loose Danny Philliskirk pass eventually made its way to Wright, who slotted past Bobby Jones.

However, Osborne, who was starting his second consecutive game after returning from injury, turned on the style in the second 45.

First, the winger worked space for himself to strike left-footed past Dewhurst before doubling his tally in the dying embers of the game, smashing another past the Boston ‘keeper.

James Rowe made three changes to the side that beat Chester, with Tom Walker, Luke Conlan and David Perkins replacing Ben Tollitt, Nathan Shaw and Will Hatfield.

The start wasn’t one that the Coasters had hoped for in the early stages as Danny Philliskirk’s pass was intercepted in the middle of the park and found its way to Jake Wright JNR through on goal, who converted from close range.

Boston were applying plenty of pressure in the opening 20 minutes through long throws and consecutive corners, but when Haughton had an opportunity to whip a free-kick into the area, the ball evaded everyone and flashed across the face of goal.

Out of nowhere, the Coasters drew level when Tom Walker burst down the right and looked for Doug Taylor inside the six-yard box, but before it found the striker, Shane Byrne turned it into the back of the net.

It sparked James Rowe’s side into life as they won a free-kick around 30 yards from goal. Nick Haughton stepped up and was inches away from putting the Coasters in front, seeing the ball ripple the side netting.

After a fast-paced start, the game quietened down a little, but Boston did have an opportunity through former Coaster Scott Duxbury, who stung the palms of Jones as he stood firm to deny Duxbury.

Fylde had an opposite start to the second half than they did in the first, as it was them who scored and put themselves ahead.

After the ball bounced around, it eventually fell to Osborne, who tremendously worked space for himself inside the area and drilled a strike into the far corner of the net.

It was a frantic half, and Osborne almost had another chance in front of goal as he pounced on a mistake in the Boston defence but slipped as he lined up an effort on goal.

Despite the Coasters having the better chances in the second half, Boston almost found an equaliser when Luke Shiels headed inches wide of the post from a corner.

An unbelievable end to the game saw Osborne grab his second goal of the afternoon on his second start since returning from injury, winning the ball back high up, rounding Dewhurst and smashing into the back of the net.