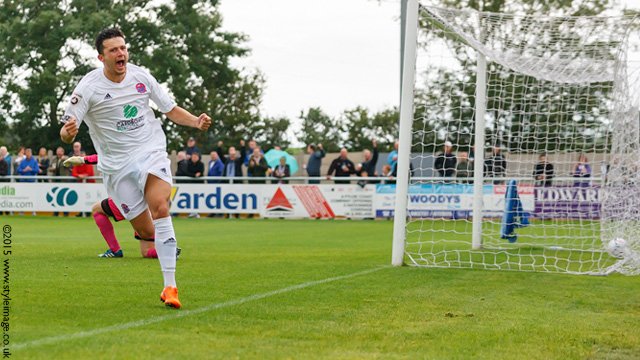 Jake Kirby’s late winner condemned the Coasters to a 3-2 defeat to Stockport County in what was a pulsating game at Kellamergh Park.

Danny Rowe was recalled to the starting line up in place of Matt Blinkhorn in the only change whilst Matty Hughes returned to the bench after recovering from injury. Stockport started veterans Gareth Roberts and Kayode Odejayi, who was a threat going forward for the visitors.

The first half was played out in a cautious fashion by both sides who knew the danger posed by the other going forward. Lamine Colley was picked out in space on the right hand side 10 yards from goal but his crossed failed to find a County forward on the end of it. Sam Finley had the first meaningful shot for the Coasters after eight minutes but his effort from 25 yards was fired over the bar.

A charging run from Sam Finley resulted in him passing to Danny Rowe who was through on goal. Rowe angled his shot just wide but the linesman raised his flag for offside anyway. An error at the back from Dom Collins presented Lamine Colley a chance to give the visitors the lead but his shot from 15 yards was high and wide of Hinchliffe’s goal.

Stockport did take the lead a few minutes later and it was via the penalty spot. The ball was played into the box to Jake Kirby who was caught by the trailing leg of Tom Hannigan and the referee had no option but to point to the spot. Hannigan walked away with just a caution. Abdulai Baggie sent Hinchliffe the wrong way tucking the ball into the bottom left corner to the delight of the large travelling contingent from Stockport. Two minutes after the penalty Baggie came off with what seemed like a hamstring injury and was replaced by Micah Evans.

The Coasters came out in the second half much improved and within two minutes had levelled the scores. The ball was played into the penalty area to Danny Rowe who appeared to be dragged to the floor by a County defender but before the referee had chance to blow his whistle Richie Baker fired the ball past Danny Hurst into the far right netting to score his second goal in three days over the bank holiday weekend.

Stockport responded well and forced three corners in quick succession although nothing came of them. Lamine Colley nearly restored County’s lead after the visitors intercepted possession in the Fylde half and sent Colley in on goal but Dom Collins recovered well to block the ball and see it out for a corner. Strikers Karl Ledsham and Kayode Odejayi both had headers go narrowly wide soon after with Ledsham’s hitting the side netting from a corner and Odejayi’s looping narrowly going wide of the right hand post.

With twenty minutes to go the Coasters brought on Matt Blinkhorn for Dion Charles and Blinkhorn impressed and was a threat to the County defence. However two minutes later Stockport took the lead again when Calum Dyson reacted first to flick his shot past Hinchliffe after Glenn Rule’s quick free kick. Shortly after Danny Lloyd came off after colliding strongly with Micah Evans after the latter had put in a tackle. Jason St Juste came on in his place. Richie Baker went close with a free kick from 25 yards but Hurst saw it wide.

Matty Hughes came on for the last eight minutes and with just four minutes to go the Coasters drew level. Blinkhorn went down under a challenge from O’Hanlon just outside the penalty area. Danny Rowe took the free kick and he could not have hit it any sweeter as he hammered the ball into the top right corner leaving Hurst no chance. This was Danny Rowe’s first goal of the season. Caspar Hughes tried an audacious shot from 40 yards but his shot was a little too powerful and it went over the bar.

Stockport won the game late on when the ball was played into the penalty area and the ball was eventually picked up by Jake Kirby who turned and hit a low shot which beat Hinchliffe to the delight of the travelling fans. The referee blew the final whistle shortly after to confirm all three points for the visitors.