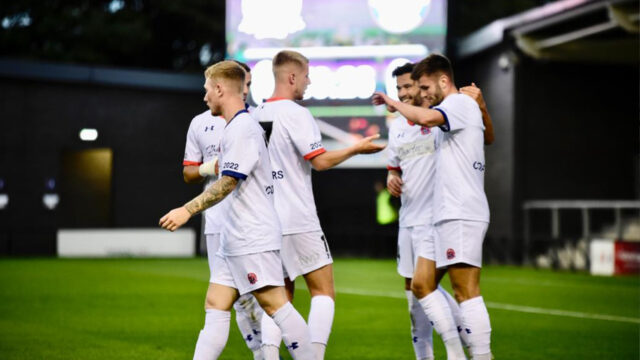 The Coasters got themselves up and running in pre-season, with Joe Rowley’s second-half chip the difference against FC Halifax Town at Mill Farm.

An unfortunate, unintended back pass found its way to Rowley, who made no mistake and scored the Coasters’ only goal of the game.

There were plenty of changes from Saturday’s pre-season opener against Atherton Collieries, as two XI’s were fielded once again.

James Rowe’s side started the brighter of the two, with the Coasters pressing well from the front and keeping the ball well when in possession.

Fylde were the side on the front foot, and it was Connor Barrett who superbly skipped past his man on the right to feed Nick Haughton, who flashed an effort just wide of the post.

Barrett then found himself with an opportunity of his own moments later, but he could only fire over from the edge of the area.

The visitors had a chance of their own from a Matty Warburton free-kick, though Chris Neal moved across his line well to gather with both hands.

The Coasters started the second-half like they ended the first, and with a totally different XI, which led to the first goal of the game.

An unintended Halifax Town back pass fell to the feet of Rowley, who chipped over the on-rushing trialist ‘keeper to give Fylde their first goal in pre-season.

Halifax weren’t posing much of a threat on the counterattack, and as a Trialist came forward on the far right, his powerful cross ran out for a goal kick as it sprung off the side netting.

Towards the end of the half, the second pre-season friendly was starting to take its toll, with very little to report on as the half came to a close.