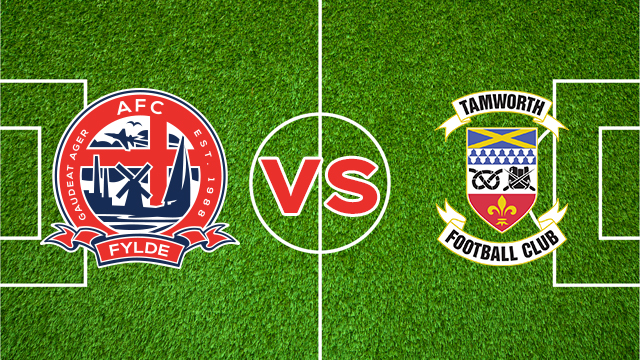 Second placed AFC Fylde host fourth placed Tamworth in the Vanarama Conference North on Saturday looking to get back within the reach of Barrow at the top of the table.

It’s been a mixed couple of weeks for The Coasters, as an excellent 3-0 home win against Boston was followed by a 1-1 draw away at bottom club Hyde last Saturday, although Fylde did have Brad Barnes and Josh Langley sent off in that game and both players will miss the game against Tamworth this weekend.

This game is the last home game until March 21st, as the Coasters travel to Hednesford Town in another crunch match next Tuesday night before travelling down to Leamington a week on Saturday.

Chorley follow suit as Fylde make the trip to face the magpies and then there’s another long away trip down to Worcester City to contend with.

Fylde’s home form has been excellent all season, but they face a very tough test in the shape of Tamworth who have been in scintillating form since November by winning 10 Conference North games in a row.

The Lambs then lost to Oxford City but managed draws against Barrow and North Ferriby before beating Oxford City at home last Saturday by four goals to three.

One of the early favorites for promotion, Tamworth started the season in somewhat of a struggle and they drew five of their first eight games but they’ve really pushed on to a different level over the last four months and seem to be going from strength to strength.

Both of these sides have gone on long unbeaten and winning runs this season and both will be looking to start another one on Saturday – it’s up to The Coasters to make sure its them who start off another fantastic run.

The match will kick off at 3PM. Your support has been exceptional so far this season and we’d love to see it continue on Saturday by coming along to support the lads once again.

Admittance is just £10 for adults, £7 for concessions and FREE to all U16’s and Armed Forces Personnel.