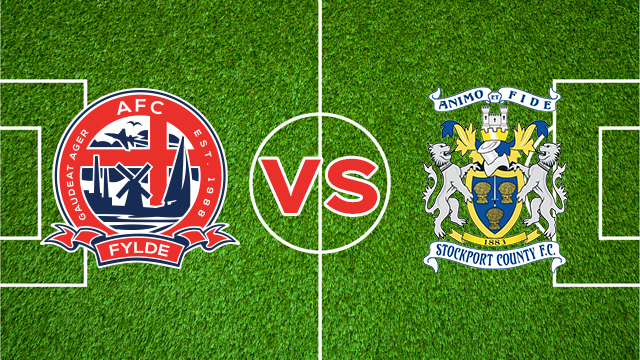 The Coasters go into their Vanarama Conference North game at home to Stockport County looking to get back to winning ways after a run of four games without a win.

It’s been a winless month for Fylde that has seen a couple of losses and a more recent league draw away at North Ferriby last Saturday, which was definitely a point gained against a good North Ferriby side in what is always a difficult place to go.

This game comes at a vital time for both sides, with Stockport in good form of late as they sit just outside the play off places in sixth position although they were defeated in midweek 3-0 against Chorley. County sit 3 points behind The Coasters but also have played two games more.

These two sides have never met in league action before, as most of Stockport’s history has been in the Football League or Conference National,, and this is Fylde’s first season in a league as high as the Conference North.

Tom Eckersley  may be available after his recovery from a long term injury, but Matt Blinkhorn is still likely to be out of contention.

The Coasters have won eight out of their last ten league games and will be looking to add another win to their already impressive collection.  This is the first home league game in around a month for Fylde and they’ll be looking to use home advantage to get a victory under their belts.

A loss in this game could see the Coasters move down a couple of places while a win could send them second in the table. A win for the away side could see them rise as high as fourth, while a loss could see County drop to as low as ninth.

Remember: This weekend only, AFC Fylde are offering half price admission to season ticket holders of Preston North End if they want to come and watch The Coasters play Stockport County.

Admission is just £5 to all adults with a PNE season ticket while under 16s are free.

Commercial Manager Dave Riche said: “We have attracted some Blackpool and Fleetwood fans already this season with similar offers and we hope with Preston away at Bristol City, that those wanting a football fix will come and watch AFC Fylde.”

Anyone wishing to take advantage of this offer simply needs to bring their 2014/15 Preston North End season ticket to the ground this Saturday and fill in a form at the match day control office to get the half price voucher.

For all Stockport County fans wishing to attend the game, please see https://www.afcfylde.co.uk/away-fans-information-guide-stockport-county/ for an information pack about your visit to Kellamergh Park. It is vital that you read this!

We’d like to see as many Coasters fans at the game as possible to cheer on The Coasters in their bid to return to the top of the Vanarama Conference North!