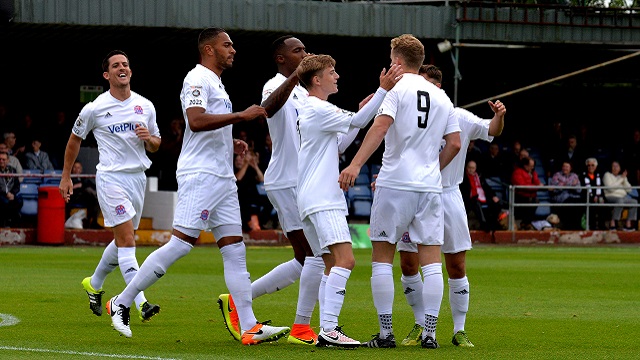 AFC Fylde star Danny Rowe insists his goals will mean nothing if the Coasters fail to win promotion this season.

The Fylde hitman bagged an incredible four goals in the 5-3 victory over Alfreton Town at the weekend to take him top of the charts, but he is refusing to get carried away.

“I’m very happy. It moves me up in the goal charts and it was a good all round performance from myself and the team but most importantly we got the win so nothing else really matters.

“As a forward you always want to be up there and people have been telling me I’m joint top now but as I said to a few of the lads, it doesn’t really bother me just yet. There is still a long way to go yet.

I always want to win the golden boot but it’s not the be all and end all. It’s the same with league position – you can’t take too much notice yet. It’s the end of the season when you want to be top of the table and if I’m at the top of the goal charts too then I’ll be happy. However there is only one ultimate aim for me and that’s promotion.

“Since I’ve come here I’ve scored quite a lot of goals and I’ll take them however they come. Free-kicks, poachers goals, any as long as they go in!

“The keeper probably should have saved my second because I almost missed the ball but thankfully it sneaked in.

“Bringing Brendon (Daniels) to the club will certainly help me get more goals in the box this year. He can put in a great delivery and he adds something a bit different to what we had last year. He likes to stay out wide and whip in crosses and hopefully I can get on the end of a few.”

The Coasters have now scored eleven goals in the last two away matches however Rowe admits manager Dave Challinor was less than impressed with the first half performance.

“The manager laid into us at half-time and rightly so. Even though we scored a couple of goals we were poor in the first half. We shouldn’t be going away from home, scoring twice and still being behind at half-time.

“All of their goals were preventable. They scored a great free-kick but we shouldn’t have given the foul away and the other two goals were poor.

“However we managed to come back and we did well after the break and comfortably won the game.”

Challinor’s side take on Salford City tonight at Mill Farm and Rowe hopes for a better showing second time around after they dropped points against Brackley Town ten days ago.

“We must put a run together now. We have started well and the longer that continues the better.

“Our first game at Mill Farm against Brackley didn’t quite go to plan so we can put that right tonight. We need to be taking as many points as possible from our home games and make it a difficult place to visit.”