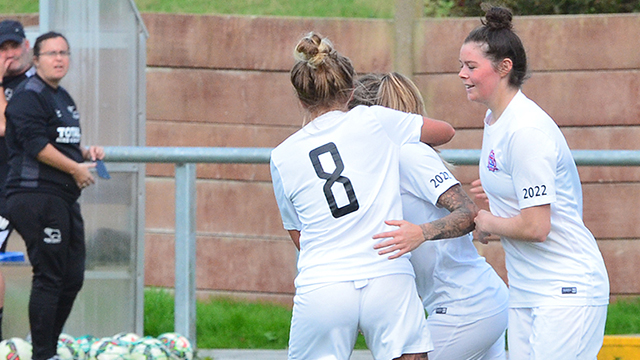 Fylde Ladies extended their unbeaten start to the FA Women’s Premier League season to five games with a solid 1-0 victory away at Wolverhampton Women.

Natasha Flint’s effort shortly before the break was the difference between the sides as the Coasters rose to sixth in the table having played considerably less games than the majority of their rivals.

Fylde headed into the game hoping to shake off the disappointment of last weekend’s Lancashire County Cup defeat to Blackburn Rovers and started brightly, enjoying the lion’s share of possession.

The Coasters went close midway through the half when a smart passing move found its way out to winger Laura Merrin who teed up captain Danielle Young, however she spurned a chance to open the scoring.

Fylde continued to pile on the pressure, testing Wolves goalkeeper Foster on a number of occasions, but were largely restricted to attempts from distance.

However, the deserved breakthrough arrived five minutes before the interval. Hannah Forster turned and found Flint who drove into the box before slotting home to give the Coasters the lead at the break.

The second-half continued in a similar vein with the away side dominating the ball whilst creating chance after chance – Wolves stopper Foster in exceptional form to keep the free-flowing visitors at bay.

Only the woodwork denied Fylde a second when the dangerous Lagan Makin beat two markers 20 yards from goal and raced into the area before rattling the post with her strike.

As the game wore on, Foster in the Wolves goal was once again proving the hero, Flint and Makin forcing the keeper into a fantastic double save before Young narrowly missed the follow up.

The missed opportunity finally sparked the hosts into life, their pacy frontline looking to latch onto long balls in behind, however goalkeeper Alex Brookes and her backline had other ideas and held firm until the final whistle to seal the victory.

Fylde manager Conrad Prendergast was delighted with his side’s display: “I was really pleased with the performance. We played far better than the scoreline suggests.

“We were very impressive, particularly during the first half. We moved the ball very well, played with confidence and quality and looked a threat every time we went forward. The girls did exactly what we asked of them so I’m delighted.”

Fylde Ladies turn their attention back to the cup this weekend with a tie against Burton Albion at Kellamergh Park on Sunday (k/o 2pm).