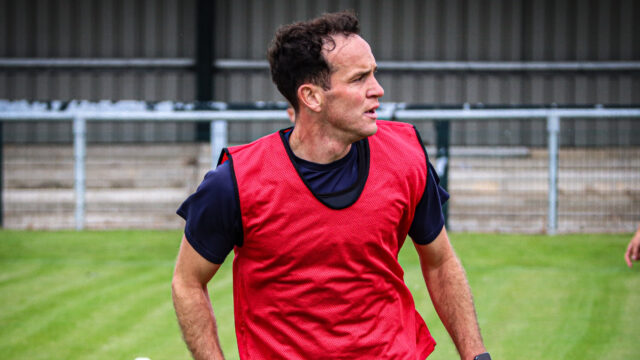 Joyce | “We’ve still got more to give”

With four consecutive wins under their belts, The Coasters head into Saturday’s National League North encounter at Kettering Town in high spirits, but summer signing Luke Joyce believes the team still has more to give as a collective group.

The 34-year-old has been a mainstay in Jim Bentley’s midfield since joining the Club in June, impressing in victories against Guiseley AFC, Hereford and Southport; while claiming the man-of-the-match award in the 1-0 home win against Boston United last month.

Speaking about his time so far, the defensive midfielder said: “The manager has put together a really good, competetive squad here, where everybody is fighting for that shirt on a matchday. There’s been no negative talk or anybody dwelling on the unfortunate events of the past two years. Everybody is just really positive and looking forward, and I think that has reflected in the way that we’ve started the season.

“We’re four in four so far, performances have been good, but we’re still nowhere near where we can be. We’ve still got more to give. It says a lot when we came away from the 4-1 win at Hereford, a fancied team in this division, thinking ‘we’ve not really played that well there’. It sounds crazy to say that, but it’s really encouraging that we are picking up such positive results but still have more to give, both as individuals and as a collective group.”

Joyce is one of several players who has spent the vast majority of his career at higher levels, and the former Port-Vale man says the competition for places will be extremely important over the course of the campaign. He added: “If you go through our squad there’s a lot of players who have played much higher than the National League North, and with that comes a lot of quality; a lot of depth. Everybody knows that they have to be at their best to keep their shirt, and if they’re not, then the gaffer has got a lot of options to replace players with.

“From the game we played at Hereford, to the game we played against Southport on Monday, the gaffer made three or four changes. They weren’t necessarily enforced and the team was just as strong. That just shows the strength in depth here. We have a couple of players out with injuries at the moment, so when we have a full squad back, the manager will have some serious headaches.”

And ‘Joycey’ is looking forward to going up against Kettering Town on Saturday, where he says the team will have to adapt to a challenging environment. He said: “We’re looking forward to Saturday, especially after the weekend we’ve just had. We’re really fortunate to have the facilities that we do here and be able to play at somewhere like this every other week, but we also have to go to away stadiums, where there are different challenges and adapt to that.

“It might be that we have to alter our game a little bit to suit the surroundings; teams will use that to their advantage, so it’s up to us to adapt to that. A team that wins promotion is one that can find a way to win games – we want to be that team.”