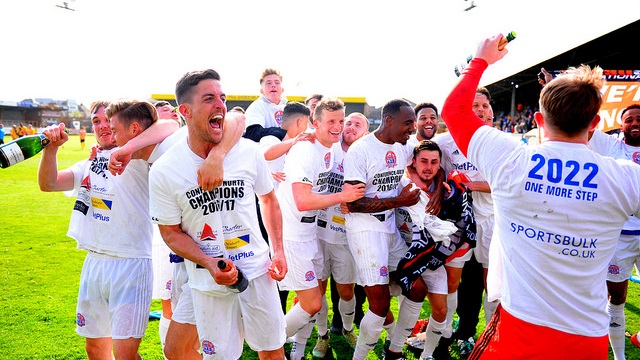 “Since I starting working in football, 20 years ago, I have witnessed and been involved in many memorable occasions, both good and bad. Without doubt, last Saturday was the most enjoyable experience I have had at a game.

“Being on the pitch after the final whistle to witness the delight of the players, the pride of the Chairman and President, the emotion expressed by the Manager and his Assistant and the jubilation of the fans, made for a truly magnificent day.

“Everyone involved has their own individual reasons for celebrating and reflecting on a mission accomplished and their hard work and efforts being rewarded with the ultimate prize. Everyone should be incredibly proud of the achievement.

“Saturday will be a great day of celebration. However, we must remember that Worcester City have a very different agenda to us. In the true AFC Fylde spirit, I know that the officials, management, team and fans will be made very welcome as they seek to secure their National League North status.

“After the presentation of the Trophy and at the conclusion of the celebrations, the hard work of ensuring that the club is fit for the National League can begin in earnest. It will also be a time for reflection.

“I would like to say thank you to all the staff at AFC Fylde who have worked incredibly hard during what has been a season of much change and development off the field. Each one has contributed to the success of the team.

“There are several people whom I would like to pay individual tribute to. Men who have helped and guided me immensely during by brief tenure so far. In no particular order, Bob Davey, Keith Wilding, Mick Woods and Eric Picton, take a bow. All have been magnificent servants to the club in its various guises over many years. Keith and Eric, your wise counsel will be missed. Enjoy your ‘retirements’!

“Finally, a big thank you to all of you, the fans, those who have supported the club over the years and those who are recent additions to the AFC Fylde family. Your support for the players has been immense. As I keep saying, you are the 12th man.

“Officials, Management, Players will come and go over the years, but for a true fan, it’s in the blood, you are a fan for life, through thick and thin. Saturday is your day, your opportunity to celebrate a magnificent achievement. Enjoy it. You deserve to.”