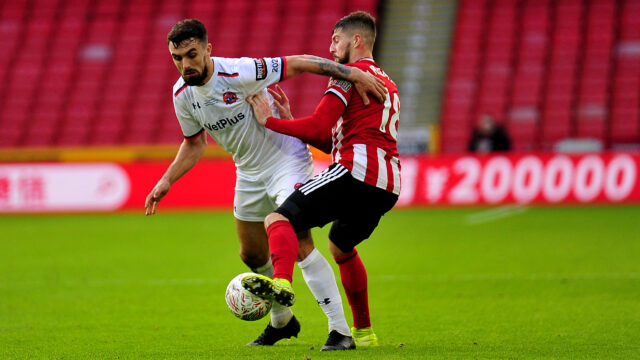 Forward leaves Mill Farm after one season with the Coasters.

AFC Fylde can confirm that Jordan Williams has left the club to join Stockport County, for an undisclosed fee.

During his 12 months at Mill Farm, Williams made 37 appearances, scoring 13 goals across all competitions, with his final strike for the club coming against Notts County in March.

The club understands some fans will no doubt be disappointed with Williams’ departure, especially as it follows so quickly on the heels of Tom Walker leaving. However, the circumstances are totally different as in Walker’s case we had no option other than to accept Harrogate’s offer.

In Williams’ case this was not so, as he still had a year of his contract to run. We therefore had to consider all the factors when deciding whether or not to let Jordan go. There was considerable discussion on the subject but the players desire to go elsewhere combined with what eventually was a very, very good offer from Stockport made the decision easy for us in the end.

The deal which had been agreed since last Monday also included Nyal Bell coming to Fylde but unfortunately despite everyone’s best efforts this week we were unable to meet his agents terms. Jim and the management team really like Nyal but we have limits to where we will go. However, we are still very hopeful Nyal will come to us on a season long loan although this has still to be agreed with Stockport.