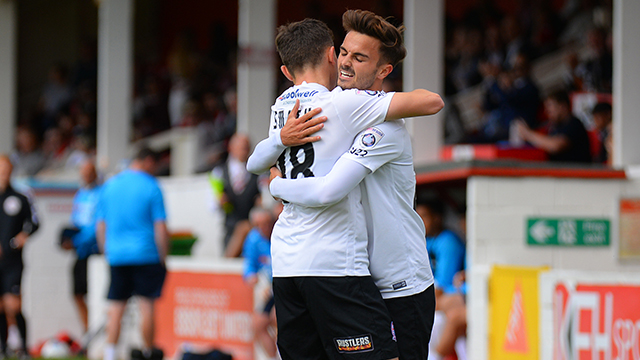 Jones off to a flyer!

AFC Fylde star Henry Jones was delighted to bag his first goal for the club at the weekend during the 3-3 draw at Ebbsfleet United.
The Welsh midfielder, signed from Bangor City in the summer, opened the scoring at Stonebridge Road after dancing through both centre-halves and slotting a left-footed strike past the goalkeeper.
The Coasters conceded a last-gasp equaliser to deny them their first victory of the new National League season and Jones was disappointed his goal didn’t earn Fylde all three points.
Jones said: “I was obviously delighted to get my first goal but we were a bit disappointed because if you score three goals away from home then you expect to win the game.
“To concede a late goal in the way that we did made for a very frustrated changing room afterwards.
“We looked very good going forward, especially in the first half and we tore them open time and time again.
“We should have scored more but three should have been enough anyway.
“If you look at the balance of the game and the chances for both sides then we deserved to win.
“I think we could have turned two of the three draws so far this campaign into wins.
“We have to learn from this and take it into the next few games. We are a new team in this league and it’s a new experience for a lot of us so we have to take these lessons on board.
“I think tomorrow evening against Maidenhead will be a similar test. All the games in this league are difficult and there won’t be many teams that you can just roll over.
“That was proved on Saturday. Even though we went two goals up, they just kept on fighting until the end and got themselves something from the game.”
The Coasters remain unbeaten so far this season following draws against Boreham Wood, Chester and Ebbsfleet but Jones doesn’t want his new side to get carried away just yet.
Jones added: “We have to be realistic as a team when it comes to our targets. If we can finish in the top half then I think everyone would class that as a good season.
“However, we are ambitious and hopefully we will also push for the play-offs, but as I say, we are a new team and we have to take it game by game and finish as high as we possibly can come the end of the season.”