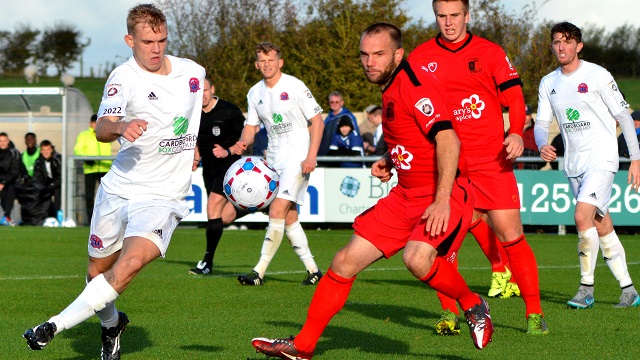 AFC Fylde boss Dave Challinor is delighted that his side are in the hat for tonight’s FA Cup draw.

The Coasters saw off rivals Barrow AFC in the final qualifying match at the weekend and will be making their third first round proper appearance in four years.

“It’s a great achievement for us,” said Challinor. “It’s something that we had as an objective at the start of the season, so to reach this stage again is brilliant and we now look forward to the draw.

“We have been at this stage twice before recently and unfortunately we haven’t managed to progress, so the next aim is to get even further still.

“We want to enjoy the occasion, but at the same time, try and beat whoever we come up against.

“We have shown the depth we have in the squad over the first three months of this season. We have struggled with injuries so to be where we are – first round of the FA Cup and top of the league going into the game – shows just how strong we are.

“We have been lucky to have been draw at home in all three of our FA Cup games this season. I don’t mind how it works out tonight night. We were at home against Accrington Stanley and away to Plymouth so we have experienced both sides of that.

“The cup run is massive for us financially and everyone here is eagerly anticipating the draw now.”

* Supporters are invited to come down to Fullers bar at Kellamergh Park from 6pm this evening to watch the draw live with players and officials.