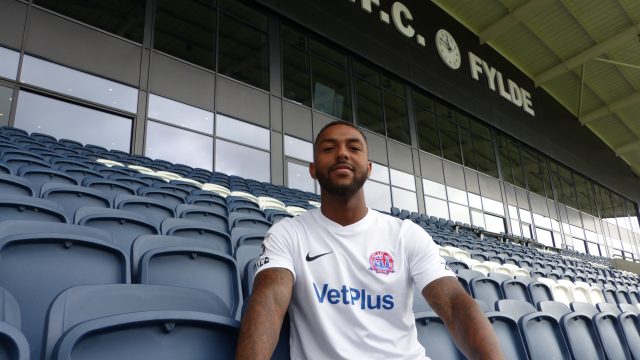 AFC Fylde have completed their sixth signing of the summer with attacking winger Ashley Hemmings joining from fellow conference side Salford City.

The 27-year-old has signed a two-year deal and will be a great addition to Dave Challinor’s attacking options.

Hemmings started his professional career with Wolverhampton Wanderers before moving around the leagues playing for the likes of Plymouth Argyle, Walsall and Mansfield Town.

When asked about the opportunity Hemmings thanked Salford City for bringing him in and stated:

“I’m at the age of 27 now and I want to be playing most weeks, at the moment it is not something they could guarantee me, thankfully I’ve gone from there to another great club.”

“I found out on Saturday that Fylde we’re interested. I knew they were a great club with fantastic facilities and they were unlucky not to get promoted last season, hopefully, I can help them to achieve that this season.”

The midfielder scored 16 goals in 41 appearances for Vanarama National League North side Boston United last season, when asked if this is something he believes can continue he commented:

“Definitely, that’s what I play football for, I like to get goals and assists but ultimately work hard for the team to get the win”.

Hemmings is ready and is looking to make his debut in tonight’s game vs Blackpool FC.

Tickets for the match are available to purchase on the day with the prices below: