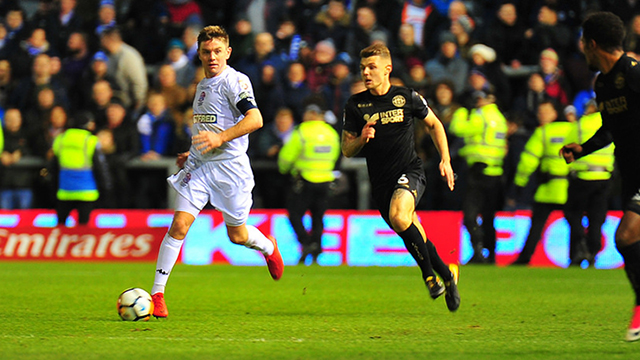 Hard work pays off for Sam

A live TV game against the top team in the competition, broadcast to over two million viewers – you would think Friday’s FA Cup clash against Wigan Athletic would have been one to relish … well not for Coasters captain Sam Finley!

Whilst the 3,400 supporters packed into Mill Farm revelled in a carnival atmosphere, Finley admits he didn’t have a second to enjoy the occasion.

Danny Rowe’s second-half spot-kick earned Fylde a replay against their illustrious opponents and now look forward to this evening’s third round draw.

Finley, who won the all-important penalty, insists now is the time to appreciate what his side have achieved.

“I didn’t have chance to enjoy it one bit at the time!” said the midfielder. “If you switch off for a second to try and take it all in then you get punished. We worked hard for 90 minutes so that we could enjoy it afterwards. Now is the time to enjoy what we have achieved and look forward to the replay.

“I though we put in a great shift and dug in deep.

“We showed them a little too much respect in the first half but at the end of the day they will more than likely be a Championship side next season.

“They have some very good players and I think they will win League One.

“At half-time the gaffer urged us to turn the match into a cup tie. We were unfortunate to concede as late as we did, but for ten minutes after the break we were brilliant.

“We were organised, won second balls and we had them penned in. I knew a goal was coming and once we got it it was inevitably going to be backs to the wall. They came at us but we were solid.

“Let’s have it right, we were up against better players and sometimes you have to just roll up your sleeves.

“No disrespect to the Conference but it’s easier to get the ball down and play in the league. Against better team you have to keep your shape and take your chance when you get it.”