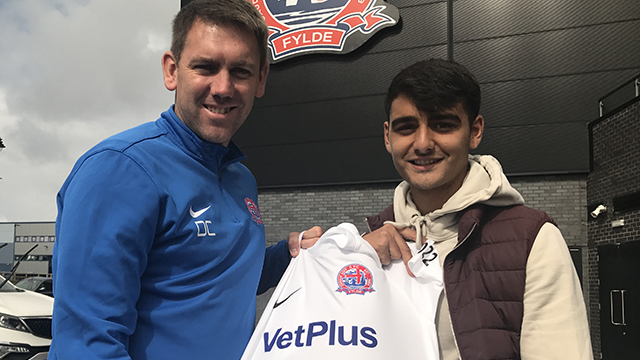 Golden boy ‘Tugay’ over the moon!

AFC Fylde golden boy Serhat Tasdemir admits he is ‘over the moon’ after signing professional terms with the club earlier this week.

The 17-year-old was rewarded with a two-year deal, with the option of a third, after becoming the club’s youngest-ever league goalscorer during the 2-2 draw against Bromley at the weekend.

Affectionately nicknamed ‘Tugay’ by his teammates after his famous footballing namesake, the Turkish forward graduated through the Coasters’ Academy set-up last season following his release from Blackburn Rovers.

Tasdemir finished last season as top scorer for the youth team and made his league bow for the senior side as a late substitute on the final day against Worcester City as Fylde celebrated the National League North title.

Now an integral part of Dave Challinor’s plans, Tasdemir hopes to repay the faith shown in him with more goals for the club.

“I’m over the moon to have signed my first professional contract,” said Tasdemir. “At just 17 years old I know I have a lot to learn and this is just the start. This is the first step in my career and I’m really looking forward to my future with the club.

“The manager gave me a squad number in the summer but at the time it was just a case of seeing how it goes this season. It’s not easy to chuck in young players, especially when we have just been promoted into a new league, but this proves that young players do get opportunities here.

“From now on I have to just keep working hard and stay focused. Hopefully there will be more goals to come from me.”

Comfortable anywhere across the frontline, Tasdemir was surprisingly let go by former Premier League champions Blackburn Rovers but firmly believes his move to Fylde has been hugely beneficial.

“I was with Blackburn between the ages of 7-15 but I was released and joined Fylde just over a year ago and everything has worked out very well for me in such a short space of time.

“I took part in the College Academy course last year and shared my time training between the youth team and the first team. I made it onto the bench for a few league games throughout the season too, which was a good experience to be part of the matchday squad.”

Whilst Tasdemir graced the bench on numerous occasions in the National League North last term, undoubtably his stand-out moment came in a 6-2 Lancashire Cup victory over AFC Darwen when the then 16-year-old wowed the Mill Farm crowd with a sensational hat-trick.

“That was one of my best moments ever,” beamed the youngster. “To score a hat-trick on my debut, in my first ever game in men’s football, was unreal.”

Tasdemir went one better at the weekend, coming off the bench to score the vital first goal that sparked a stunning comeback against Bromley and the forward admits he was pleasantly surprised to get the call.

“I wasn’t really expecting to come on because we were two goals down at the time. But the gaffer made a brave choice to put me on and I managed to get a goal to put us back into the game.

“I’m delighted to have scored my first league goal and it was even better that it helped us to get a point from the game.”