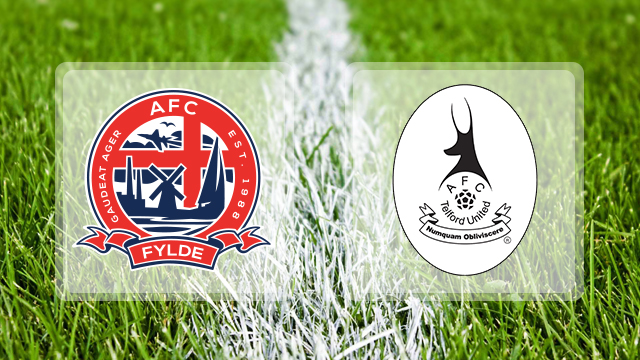 AFC Fylde coasted into the last 16 of the FA Trophy with a fantastic performance over Conference Premier side AFC Telford United.

A blistering brace from Danny Rowe was the highlight of a highly entertaining encounter which was started by Liam Tomsett early in the game. Josh Wilson also scored one of his own to add to his two assists.

It was one way traffic throughout the first half as Fylde took the game to their Conference Premier opponents. Both Wilson and Michael Barnes both saw chances saved or cut out by Freddie Hall inside the first five minutes and Wilson had another bite at the cherry when his 20 yard curling free kick is deflected over the bar on nine minutes.

With 12 minutes on the clock Fylde were denied by a fine save from Hall when Danny Rowe played a great ball to Richie Allen and his cross missed both Rowe and Wilson but found Barnes at the back post however his shot was expertly kept out by the Telford stopper.

But Fylde had the lead on 17 minutes when a perfect through-ball from Wilson found Tomsett who beat the offside trap to turn the keeper and slot home.

And Wilson should have made it 2-0 on 21 minutes but diverted Barnes’ cross wide of the post when it looked easier to score.

In a rare attack on the Fylde goal a half chance for Mike Grogan saw him send the final chance narrowly wide with an acrobatic effort from 15 yards.

The Coasters ended the half well as Allen was unlucky not get on the score sheet sending a header wide of the mark before Rowe, Allen again and Tomsett all had chances saved or blocked.

The first effort of the second period fell to the visitors but Neil Byrne’s strike sailed over the bar and it was one way traffic again as Fylde searched for that elusive second goal.

More and more chances fell to The Coasters but couldn’t be converted as Allen, Barnes, Rowe, Wilson and even Caspar Hughes were denied by the elusive Hall but midway through the half Fylde had that important second goal.

Rowe collected the ball from Wilson on the edge of the box and drove the ball past Hall with a powerful strike on 69 minutes.

Eight minutes later Wilson was rewarded with a goal of his own connecting with Danny Lloyd’s cross to divert the ball past Hall for a 3-0 lead.

Telford pushed for a consolation but it was to no avail and with time running out in stoppage time Rowe pulled off the goal of the match when he turned his man to fire in a thunderous strike from all of 35 yards which gave Hall no chance.

FC United of Manchester are the opponents in the next round and that game is on Saturday at Curzon Ashton’s Tameside Stadium.