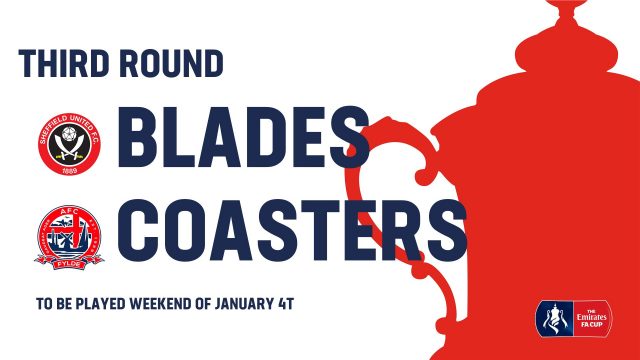 AFC Fylde will travel to Premier League side Sheffield United in the Third Round of The FA Cup.

The Blades, who currently sit seventh in the Premier League table, are four-time FA Cup winners – last wining in 1925.

With a cup pedigree and historic stadium to match, it’s set to be a day to remember for Coasters fans – who will see their side take on Premier League opposition for the first time.

Taylor who spent three years at Sheffield United, is one of a few former Blades in the Coasters side – with Mark Yeates and Danny Philliskirk also having worn the red and white.

“There were mixed memories for me having played in the Championship before getting a really bad injury, said Taylor. “But it’s one I look back on with great fondness, playing at that level in a great stadium.”

“There’s always an upset, so you never know, we’ll be confident, positive and will give a good account of ourselves.”

Ticketing and travel details for the tie will be announced in due course – so keep your eyes pealed on the club website and social media.