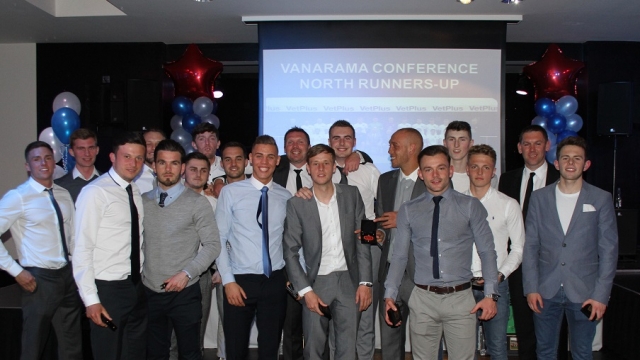 AFC FYLDE brought the curtain down on the 2014/2015 season at Ribby Hall Village with the end of season awards.

Supporters, players, management, sponsors and club officials were in attendance for the dinner and presentation evening.

The club’s youth, development and first team structure were all recognised on the night with entertainment provided by musician Daniel Sings.

Danny Rowe won the Golden Boot after firing 31 goals in his debut season while Danny Lloyd’s stunning free kick against Gloucester City was voted goal of the season by those in attendance on the night. Tom Hannigan was Manager’s Player while Josh Langley was Player’s Player. Dion Charles was the Young Achiever.

Dean Ing received the Youth Team Top Scorer award while Jack Williams received the same honour for the Development team. For a full list of winners – see below.

One of the biggest cheers of the night saw Lewis Stanley voted Supporter of the Season, while Ian French was Clubman of the Year.

Audience participation saw young Billy Williams win the £150 cash prize for heads and tails, with a similar amount being given to the raffle.

An auction brought the night to a close with signed FA Cup from this year’s run come under the hammer.

The final two items in the auction saw youth team boss Simon Hurst bid successfully to become a new signing for the 2015/2016 campaign and season ticket holder Paul Kirkham will be the Manager for the friendly against Bolton Wanderers and sit in the dugout alongside his “assistants” Chally and Colin!

A big thanks to those who attended and supported in any way.

A full gallery of images from the evening from our photography team will be uploaded shortly.