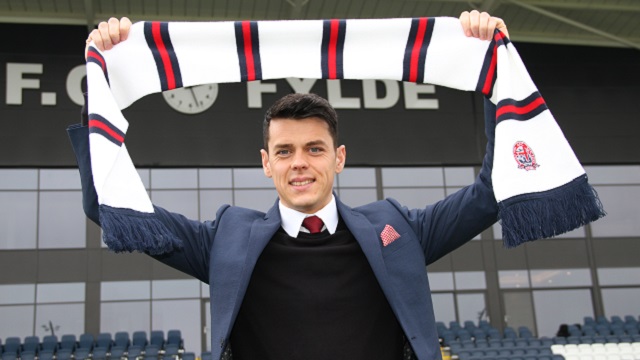 New Fylde Ladies head coach Conrad Prendergast admits he is raring to go following his appointment at the club.

The 24-year old has become one of the youngest first team managers in the game, but admits the challenge spurs him on further still.

“I was working at Manchester City with the Girls Reserve Team and I became aware of the opportunity at Fylde. It was a huge opportunity in my eyes to become the first team manager. I went through a rigorous interview process and was successful and now I can’t wait to get started.

“I held various roles at Man City. I looked after the Women’s Development Squad for a spell and I also worked in the Community Foundation at the club looking after the Soccer Schools and the extra-curricular activities. As well as that, I looked after the Foundation Phase Under 9s and 10s boys. So quite a wide variety.

“I have been aware of AFC Fylde for a while now and I have been to a few of the men’s game this season. Mill Farm is a fantastic arena and I have been so impressed with the facilities. I have been keeping an eye on the ladies team too and now that I am here I want to help them progress further still.”

The Ladies team made an electric start to the campaign, but have suffered a blip of late and the new man is keen to breathe new life into Fylde’s Super League ambitions.

“First things first I want to get in and get a real feel for the club. I want to have a good look at the players that I have at my disposal and get to know them on a personal level too.

“We are getting towards the end of the current season so it gives me a bit of time to put plans in place for next season. We want to get ourselves back at the top of the league and pushing for that Super League status.

“That said, there’s no reason why we can’t still achieve that this season. It certainly isn’t out of the question if we can perform to the best of our ability. We need to be winning and applying pressure on the teams above. That way, if the opportunity does arrive, we are ready to grasp it with both hands.

“It is going to be tough but I am going to embrace that. The ambitions of the club mirror my own ambitions and I am relishing the challenge ahead.

“I’m really grateful for the confidence that the club has shown in me. They have put a lot of faith in me, and perhaps a little risk, and now it’s my job to prove that they have made the right choice.