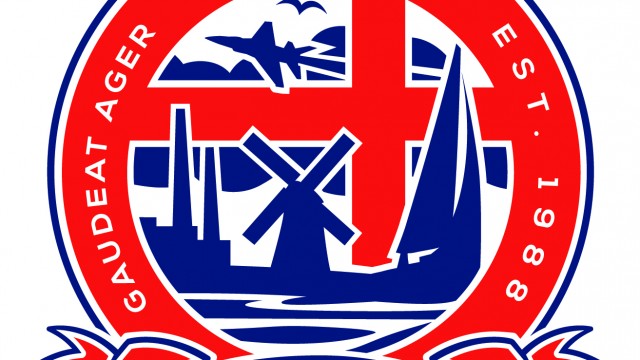 The Coasters couldn’t have started 2015 with a bigger game. Away at title rivals Barrow and the 2-1 win that followed put the Bluebirds four points behind in the title race. Ulverston born Liam Tomsett and former Barrow striker Danny Rowe got the all important goals for Fylde but the lads had to dig deep to preserve their narrow lead after Paddy Lacey’s half volley made it 2-1 with ten minutes to go.  Next up was a home game with Lowestoft Town, one of only three sides to beat Fylde until then. There was to be no repeat of the game in August as Fylde blew the Trawlerboys away with 3 goals in the first 25 minutes, however Jacek Zielonka did grab a late consolation for the visitors. A tricky mid week game at Solihull Moors was next. Both sides had chances in a closely fought game but into extra time Caspar Hughes scored his first ever goal for the Coasters to keep their four point advantage at the top. A 2-1 home win over a much improved Oxford City followed. Then came arguably Fylde’s most impressive performance of the season. A 4-0 demolition of Conference Premier side AFC Telford United in the FA Trophy. Liam Tomsett got the ball rolling before further goals from Josh Wilson and Danny Rowe with a brace. Unfortunately that was the last time the Coasters would taste victory for almost a month. A disappointing 3-1 defeat at FC United of Manchester ended their Wembley dream, with the Northern Premier side 3-0 up at half time. 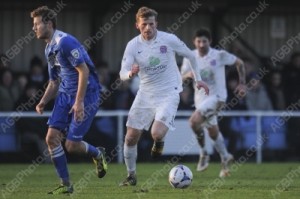 Danny Rowe runs at the Lowestoft defence in their 3-1 win.

February started badly, with a 3-1 home defeat at local rivals Chorley. Richie Allen gave the Coasters the lead with a fine individual goal but the lead wasnt to last. A deflected shot from Josh Hine brought the Magpies level on the hour mark, with Aaron Burns’ brace confirming victory. Then came a 3-1 defeat at Guiseley in mid week, with the Lions impressive with their slick and accurate passing. A disappointing 2-1 home defeat to Harrogate saw the Coaster lose 4 games on the bounce for the first time in over a year. A much improved performance at home to Boston United did bring some joy in February. A screamer from Danny Lloyd and a Mark Jones own goal gave the Coasters an early 2-0 lead, with Richie Allen adding a third in injury time. It looked as though the losing run had come to an end after Josh Wilson’s stunning strike gave Fylde a first minute lead at Hyde, however the bottom side did not play how their league position suggested. Andy Pearson’s header from a corner levelled the score just before half time but the Tigers’ felt they could have won the game, especially after the Coasters’ went down to nine men with Brad Barnes and Josh Langley both seeing red. A frustrating 1-1 draw with Tamworth was to follow. In a game the Coasters dominated, Danny Lloyd gave them an early first half lead however a momentary switch off at the back allowed Leon Mettam to equalise with an acrobatic effort from 10 yards.

March started badly also, a 2-0 defeat at Hednesford Town was a low point in the season. Fylde struggled to break down a resolute Hednesford defence and were made to pay with two late goals. However that was to be the end of the bad spell and a 4-1 win at Leamington put the Coasters back in business. Danny Rowe’s first half brace gave Fylde a 2-1 lead at half time, with late goals from Adam Sumner and Richie Allen confirming victory in a game which was rife with controversy. Leamington goalscorer Danny Newton was sent off just before half time for a stamp on Joe Booth whilst home fans felt that the Brakes keeper had been impeded in the build up to Danny Rowe’s second goal. The following Saturday was the second derby of the season away at Chorley. Once again it was Danny Rowe who gave the Coasters the lead however two quick goals from James Dean and a Matthew Blinkhorn own goal saw the Magpies turn the game on it’s head. However no-one could have seen the ending. Dion Charles picked up the ball 25 yards from goal and unleashed an unstoppable drive into the top left corner leaving Sam Ashton no chance and earning the Coasters a well deserved point. Three days later Fylde travelled down to Kidderminster’s Aggborough Stadium to play Worcester City. Fylde were to repeat their 4-0 thumping of the midlands side with Dion Charles playing a starring role. His terrific run at the Worcester defence ended with him cutting the ball back for Josh Wilson to tap home into an empty net from 6 yards. On the brink of half time it was 2-0. Richie Allen’s low cross from the right was flicked home by Danny Lloyd. A mis-timed header from a Worcester defender allowed Danny Rowe time to volley emphatically past the keeper to make it 3-0 with 20 minutes to go and Josh Wilson’s deflected free kick made it four soon after. The following game with Hyde marked the first home game with the new 250 seater stand in place and Danny Lloyd scored the first goal infront of it, stabbing home at the far post after a melee in the penalty area. However history was to repeat itself as Ryan Masterson glided through into the penalty area and finished low under Hinchliffe to the delight of the travelling Hyde fans. Despite the good result for the Tigers it was not enough to prevent relegation to the Northern Premier League. The final game of March was a frustrating 0-0 draw at Gainsborough Trinity. The most frustrating fact was that the Coasters twice hit the bar with headers from corners whilst Trinity went close late on.

April started with a bang with a 6-2 thrashing of Colwyn Bay. The Coasters blitzed their Welsh opponents with three goals in the first seven minutes. Danny Rowe kicked things off with a goal inside 90 seconds and Richie Allen added two goals in as many minutes, before Obi Anoruo’s fine solo goal pulled one back for Colwyn. Allen completed a six minute hat-trick from the penalty spot after just 11 minutes. James Ellison scored  a penalty to make it 4-2 but Danny Rowe added a fifth just after half time. Allen converted another penalty with 15 minutes to go to make it 6-2 however he did miss a late penalty, the fourth of the game, which would have meant the Coasters hitting seven in a game for only the second time in the season. Solihull Moors were the next team to travel to Kellamergh Park for a game which proved to be controversial in the title race. Darryl Knights smart finish gave Solihull a deserved half time lead. However Fylde started the second half in style with Danny Rowe lifting the ball over the Solihull keeper from an acute angle to equalise and Richie Allen’s finish made it 2-1 a few minutes later. Josh Wilson had a goal disallowed for offside which looked comfortably onside but the most debatable decision was to follow. In the 94th minute of the game Fylde conceded a penalty for an apparent handball by Josh Langley, with Omar Bogle capitalising to earn Solihull a point. A late Danny Lloyd winner at Bradford Park Avenue sent the Coasters top having played a game more than Barrow and the Coasters were delighted with their late win in tough conditions in West Yorkshire. A week later Fylde were given a scare at Harrogate Town after James Walshaw’s deflected free kick gave them a deserved lead. The Coasters turned the game around just before half time as Danny Rowe flicked a header from Richie Allen’s cross into the opposite top corner leaving the keeper no chance and Danny Lloyd gave the visitors the lead, smashing home from 10 yards after a penalty area scramble. Rowe added another two goals to his season’s tally, the first a powerful penalty and the second a low finish to the bottom right corner after some neat footwork. The final game of the season at home to Gloucester City turned out to be the most entertaining of the season. A 6-4 thriller with goals flying in from all angles. The Coasters’ went behind early on but a deflected Lloyd free kick and a Rowe penalty turned the game around quickly. Gloucester equalised with a header at the back post from a corner on the brink of half time. Rowe added his second, tapping home at the back post form a cross from Brad Barnes. White equalised for Gloucester with a curling finish to make it 3-3 and Billy Jones’ penalty made it 4-3 on the hour mark. Fylde hit back with a penalty of their own, the third of the game which was converted by Danny Rowe. Danny Lloyd’ superb free kick made it 5-4, a goal which later won Fylde’s goal of the season and Dion Charles smart low finish made it 6-4. Despite the amazing win it was not quite enough for Fylde as Barrow’s 3-2 win at Lowestoft meant they won the title.  Guiseley were the play-off opponents, with the Coasters’ only picking up a single point against the Yorkshire side in the league. A narrow 1-0 defeat was not a terrible result and gave Fylde confidence that they could turn it around in the return leg at Kellamergh Park.

The second play-off leg was the only game of May as Guiseley came back from a goal down to win 2-1 and seal a 3-1 aggregate win. Richie Allen gave the Coasters the lead after just 20 seconds, heading past Steven Drench after the Guiseley defence had misjudged a long ball by Luke Denson. Guiseley responded with a powerful header from Nicky Boshell and a terrific strike from Andy Holdsworth which sealed the Lions’ victory. Guiseley would later go on to defeat Chorley in the play-off final at Victory Park a week later. All in all it was a fantastic first season in the Conference North for AFC Fylde despite missing out on the title and promotion. Hopefully next year will be even better!