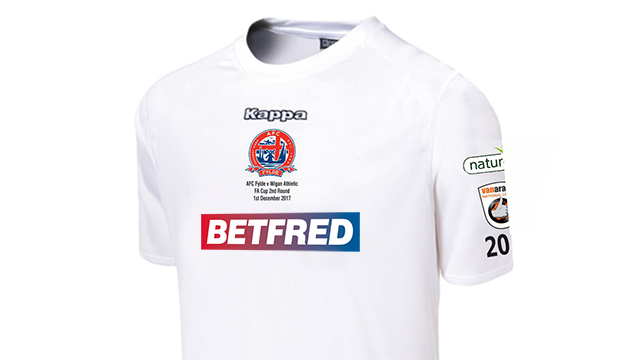 Coasters odds on for Betfred!

AFC Fylde are thrilled to announce a major sponsorship deal with bookmakers Betfred.

The betting giants have joined forces with the Coasters to sponsor our commemorative match shirts, designed specifically for the historic FA Cup second round clash against Wigan Athletic.

Betfred owner Fred Done, said: “I am delighted to be able to sponsor AFC Fylde in this year’s FA Cup.

“Fylde against League One high-flyers Wigan is most definitely what the early rounds of football’s oldest club competition is all about.

“Here’s to a fantastic performance from the Coasters and a reward of one of the Premier League big boys at Mill Farm in round three!”

If you would like to get your hands on one of the limited edition shirts then call 01772 598859 or pop into the club shop. Shirts are priced at £35.00 and are available whilst limited stocks last.