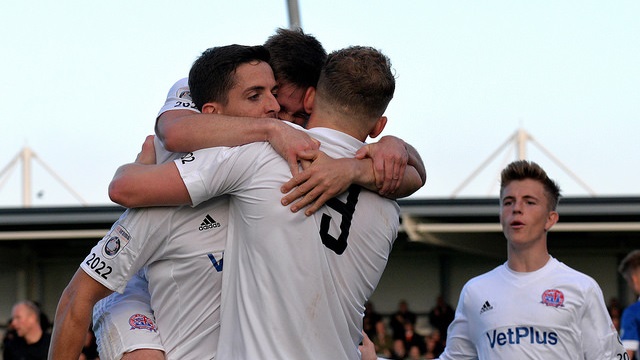 AFC Fylde manager Dave Challinor admits he was forced to change his system in order to get a result against a resolute Nuneaton Town side at the weekend.

The Coasters needed a second-half winner from 20-goal frontman Danny Rowe to seal the points and Challinor was relieved by the improvement after the break.

“All wins are hard-fought. All games are difficult, especially when you’re playing a full-time team that are organised. They play a different system to most, which is always difficult to play against.

“I suppose in the majority of circumstances, teams will either play 4-3-3 or 4-4-2. We knew that Nuneaton would play with a diamond and we’d have an overload in the middle of the pitch. For the first five minutes we couldn’t get near them. We couldn’t get near the ball because they had an extra man in there.

“We had to change our system for 25 minutes and we were poor but we got to grips with it and scored a goal. Then we had our best spell towards the end of the first half. We then go and give them a goal on half time, a horrific goal from our perspective.

“Second half, we were better and that resulted in them putting 11 men behind the ball and making it difficult for us. It was always going to be a match for patience. Thankfully we’ve got the goal and got ourselves in front and then we saw the game out.”