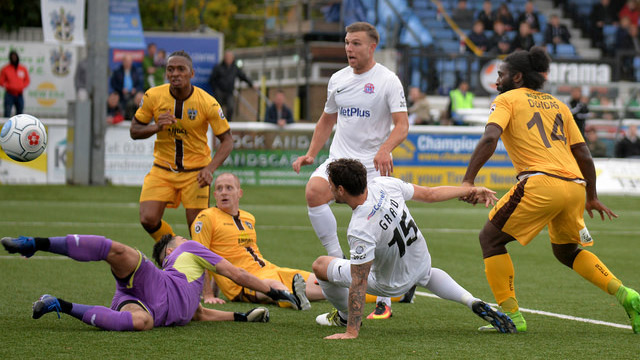 AFC Fylde manager Dave Challinor cut a frustrated figure after watching his side go down 2-1 at Sutton United in the National League.

Two goals in the space of a minute knocked the Coasters for six and despite pulling one back late on, Challinor’s side couldn’t find the all-important equaliser.

Challinor said: “I thought it was a poor game in general. If we could have got in at half-time at 0-0 then potentially we could have tried to sort things out.

“However, we have cost ourselves the game with two shocking pieces of defending just before the break which has given us a mountain to climb.

“We huffed and puffed in the second half and made it more difficult for ourselves by going down to ten men. From there we actually showed a bit more desire and got some belief with the goal.

“We could have got something from the game in the end but we have to show that belief from the start  because if we had then we might have come away with something.

“We frustrated ourselves in the first half – we were awful. We haven’t had many clear-cut opportunities but we got ourselves into some good positions and we didn’t take advantage.

“We had a makeshift centre-half pairing but there was more than enough experience in there to deal with the goals. The first was a ball over the top and it was a school boy goal.

“From there, the experienced players had to get together and make sure we got to half-time. To concede within a minute of that was mind-blowing with the players we had out there.”

Fylde midfielder Lewis Montrose was given his marching orders midway through the second-half and will now miss two matches after seeing red at Leyton Orient last weekend.

Challinor added: “It was stupidity from Lewis. The first one isn’t a booking for me but regardless of that, you can’t make another tackle like just seconds later. We will now suffer for that and so will he. He has made a poor decision and I can’t defend it.”