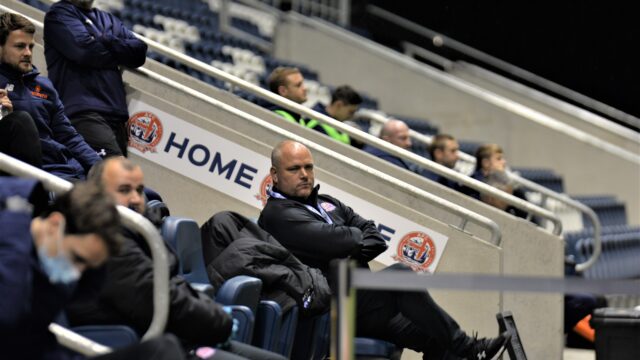 AFC Fylde host Farsley Celtic tomorrow afternoon in the National League North. Bentley’s side are currently unbeaten this campaign and sit joint-top of the league on 9 points, with only goal difference separating them from Gloucester City at the summit.

Farsley on the other hand, arrive on the Fylde Coast in 18th position, having lost two and drawn one; their point coming in a hard-fought 1-1 draw against York City earlier this month.

The manager, Jim Bentley, returns to the dug-out on Saturday, having initially entered a period of self-isolation prior to his operation, which has now been pushed back to the end of November.

Speaking to afcfylde.co.uk on Friday, the AFC Fylde boss reiterated the importance of keeping the momentum going:

“This is our third game in just six days, so it has been demanding on the players physically but that is why we do the work that we do, so that we can deal with these intense periods.

“In the current circumstances, there will inevitably be postponed fixtures and rearranged games,  so they are going to come thick and fast – we have to be ready for that.

“The positive is that the momentum we’ve managed to build has been superb, so hopefully we can carry that on”.

With so little time to prepare in between games, Bentley says he and the rest of the staff have had to readjust training in order to give the players enough time to recover:

“We have had to make sure training has been low-key this week and monitor the workload that the lads are putting in on the training ground, as we need to minimise the risk of muscular injuries as much as we can.

“Recovery is absolutely vital, but also getting the balance right in terms of pushing the players physically.”

The Coasters came up against Farsley Celtic in the FA Cup just over a fortnight ago, but Bentley is expecting another tough battle. He said: “We put everything into the Kettering Town game on Wednesday night; desire, commitment; belief, and we will need all of that again.

“It’s important that we guard against any complacency. We will show them respect as they have a certain way of playing that can cause problems. They are direct, and particularly dangerous off set pieces, so we will need to stand up against whatever they throw at us.

“I think they’ve proven how well they can play when they managed to take a point off York earlier in the season, but as I have said before, this is all about us and how we approach the game. That is what will determine how well we do on the day.”

The game will kick off at 3 pm, and can be watched live on coasters.tv. Match passes are available for £7.99, while season-card holders that have already agreed to the streaming package will be able to watch the game for free.