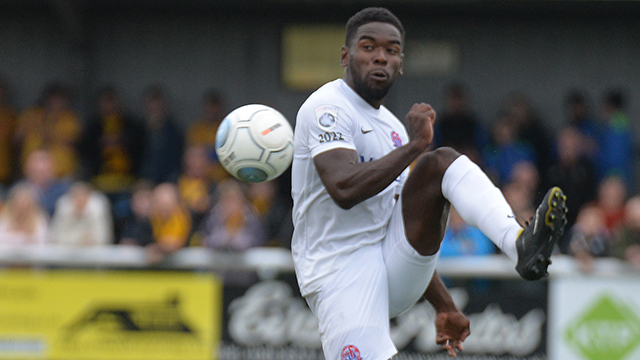 Flying Fylde full-back Zaine Francis-Angol admits he was as shocked as anyone to see the Coasters drawn against his former club Kidderminster Harriers in the FA Cup.

The Coasters will host last season’s title rivals in the first round of the competition next month after seeing off Wrexham at Mill Farm in the final qualifying round last weekend.

Francis-Angol was an integral part of the Harriers side that finished runners up to Fylde in the race for National League North glory and was rewarded with a place in the league’s Team of the Year ahead of his summer switch to the Fylde Coast.

The 24-year-old joined fellow defenders Jordan Tunnicliffe and Josh Ezewele on the well trodden path between the two clubs and is expecting anything but an easy ride from his former employers when the two rivals go head-to-head in November.

“I was very surprised to be honest,” chuckled the former Tottenham Hotspur youngster after Monday evening’s cup draw. “Obviously I knew they were in the hat too but I never thought for one minute we would pull them out alongside ourselves.

“So it’s another game in our season against another good team. They are in the league below us now but they are still a strong side.

“The team at Kidderminster has changed a lot since last season but they have kept hold of a couple of their key men, particularly Elton (Ngwatala) who is a very good player.

“They have also brought players in of a good quality so it won’t be an easy match for us.

“Obviously three of us have moved here from Kidderminster but I don’t think that will have any real bearing on the game. I don’t see there being any extra pressure or animosity because I just go out there to play football and enjoy it.

“Usually in these cup draws you either want a big occasion against one of the top sides or a lesser game to put the odds in your favour.

“I think this one is somewhere in-between the two. It’s a decent home draw for us, but Kiddy have long been seen as a good Conference side so we won’t be taking anything for granted.

“With things not going as we would have liked in the league at the moment, this could give us the boost that we need to start climbing the table. It was a good win against Wrexham last weekend and we have been rewarded with a decent draw and now we are very much looking forward to the game.

“It’s the FA Cup and anything can happen. You only have to look at the success that some lower league teams have enjoyed in recent years to know that.”

Whilst admitting that his new side have not made the ideal start to their debut National League campaign, Francis-Angol is far from concerned and believes only the narrowest of margins have been costing the Coasters.

“I haven’t come up against anyone this season and thought ‘wow, we are a long way off these lot’. Not one team so far has made me worry that we might struggle.

“They have all been very tight games and the odd mistake has decided quite a few. A goal nicked here and a missed chance there have cost us at times, but I haven’t seen a massive difference in quality between any of the sides we have faced.”

On a personal level, the popular left-back believes his own form is improving and hopes to flourish under Dave Challinor’s new look formation.

“I think I started a little slowly but I feel like I’m getting into my stride now. I just want to start adding a few assists to my game and I think this new system we have started playing will help me do that. It allows me to get up the pitch more and I have always been keen to do that.”

The Coasters are faced with two quick-fire league games before attention returns to the FA Cup – a familiar scenario for Francis-Angol.

“The games come thick and fast at this level, as they did last season and the season before so it’s nothing new to us. We have some very big league games ahead and it’s important to start getting some more points on the board and to get ourselves into a better position in the table.”