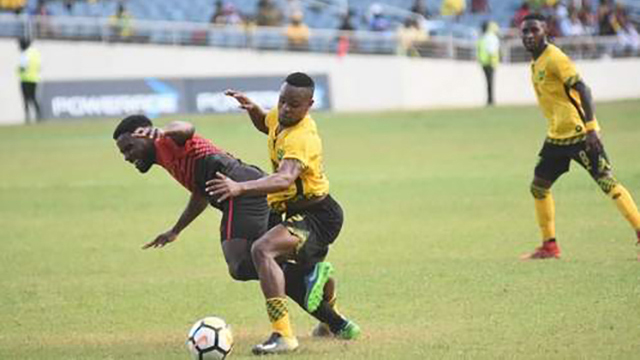 Whilst his AFC Fylde teammates travelled to Dagenham at the weekend, full-back Zaine Francis-Angol found himself 4,000 miles away on international duty.

The Coasters star, signed in the summer from Kidderminster Harriers, became the first Fylde player to win a cap whilst with the club when he joined up with the Antigua & Barbuda squad for their friendly double-header.

Francis-Angol spent a week away with the international set up, alongside a host of British-based players, as they secured a 3-2 victory over Bermuda and a credible 1-1 draw against Caribbean top dogs Jamaica.

The 24-year-old has been one of Dave Challinor’s star performers this season in the National League and was pleased to continue his good form on the international scene.

Francis-Angol, who now has 20 caps for his country, said: “I flew out last Sunday after the Hartlepool game and it took about nine hours. There was about ten of us on the flight over together from England – Rhys Browne at Yeovil, Mahlon Romeo from Millwall and a few Conference players too.

“The tempo in training is a lot different to over here, it’s a lot shorter and sharper. But it’s the same kind of format – possession, keep-ball and then into small-sided games. The focus is very much on the tactical side and shape for the next game.

“It was so, so hot but thankfully we trained in the evening. Even then it’s a good 20 degrees but at least the sun wasn’t burning on your back. The games were also early evening.

“Bermuda had a few decent players but had it not been our first international game for almost two years then we would have absolutely battered them.

“It was a good chance to get back into the swing of things for lads that haven’t played together for a while and it was important to get a win in our first game back.

“The Jamaica game was a little different. They didn’t have their big hitters but they still had some decent players out there. They have such vast pool of quality players to choose from.

“The team they started was of a good standard and they were expected to beat us but we managed to get a late goal and draw.

“The pitch wasn’t great and probably didn’t suit Jamaica. It was a very tough game because they are so athletic. They are all fast and skilful and it was a good test for me because the winger I was up against was a decent player.

“We have a tournament coming up later in the year – the League of Nations – that goes towards qualifying for the Gold Cup, effectively our version of the Euros.”

The marauding left-back was a notable absentee from Fylde’s defeat at Dagenham & Redbridge and admits it was one game that he didn’t want to miss.

“Of all the game it was one that I especially didn’t want to miss because it’s my hometown and my whole family would have been there. So I was gutted to miss that one particularly.

“I was keeping track of the game but the WiFi and Sky Sports app don’t work very well over in Antigua!

“It was frustrating that we didn’t get a result but it seemed like a tough game.

“This weekend is now massively important. Dover lost on Tuesday and they have Tranmere at the weekend so this is a big chance for us to put the situation back into our own hands.

“Every game is a winnable game in this league. We have surprised everyone with how many goals we have put past the top clubs at times so we are still confident.

“I’m fit and ready to go this weekend. I had the two games whilst I was away – and probably lost half my bodyweight in the heat – but I feel good.”