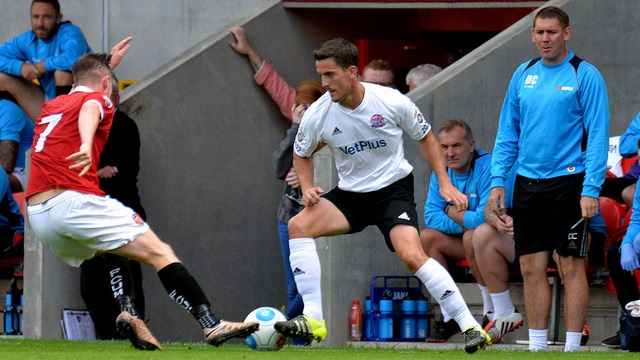 AFC Fylde boss Dave Challinor was delighted with his side’s work rate after Saturday’s 3-2 victory at FC United of Manchester.

The Coasters played for over half the match with ten men after Sam Finley’s dismissal on the stroke of half-time but managed to hold on for three points and Challinor was full of praise for his league leaders.

“We have played for 50 minutes with ten men and they worked like no one’s business to get that result. You have to ride your luck at times when you are a man light and we had to adapt and play in a way that I thought would win us the game. We accepted that they would have quite a lot of the ball but we kept our shape.

“We relied on people going in and doing the jobs we asked them to do. We were disciplined, we didn’t go chasing after the ball and we only had two or three attacks in the whole of the second half. The desire to do the right thing rather than run around and press in the wrong areas was very pleasing.

“We invited them on and then once the ball came into an area that we could engage them, we did so and they were brilliant.

“To see the game out and get three points is fantastic. It will do a massive amount for the lads in the changing room in terms of belief and self confidence.

“We have to back that up now against Stockport on Tuesday. It’s important that we recover properly because that will have taken a lot out of the lads.

Speaking of the sending off, Challinor said: “I agree with the decision. It’s an act of absolute stupidity. I’d rather talk about the 15 people that helped us win the game than the one that almost cost us it.

“I will deal with that internally and everyone will suffer from it so it’s been a costly action.”