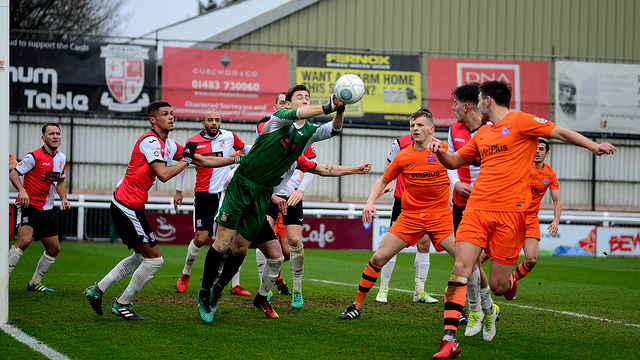 Woking defeat ‘a game too far’

AFC Fylde manager Dave Challinor believes yesterday’s defeat at Woking was ‘a game too far’ as his side’s sensational run came to an end.

The Coasters suffered their first defeat of the New Year when Lazar Stojsavljevic’s nodded home the only goal of the game as the Coasters slipped marginally outside the National League play-off places.

Challinor said: “It’s easy to think, when you are on a run like we were, that you are going to win every game.

“Looking at the chances, we didn’t deserve to lose. We should have got something from the game and we are frustrated.

“However, we can’t get too carried away with the disappointment because we have had a brilliant run and it was perhaps one game too far for us.

“We could look at what-ifs and missed chances but it’s gone now.

“Woking weren’t in the best form and were probably a bit fragile mentally and to go in front would have been a big boost for us.

“We didn’t play at the tempo that we have done recently but it’s difficult to make changes when you have been winning games.

“We improved after the break, particularly after conceding, and Rowey has a great chance that nine times out of ten he sticks it away, but it was the day that the keeper makes the save.

“We had 11 games in 33 days and to pick up 16 points in January is a great effort. If we can replicate that until the end of the season then we have a real chance.

“The season settles down now with games in hand out of the way so hopefully we can continue to perform when we get back on the horse next weekend.”