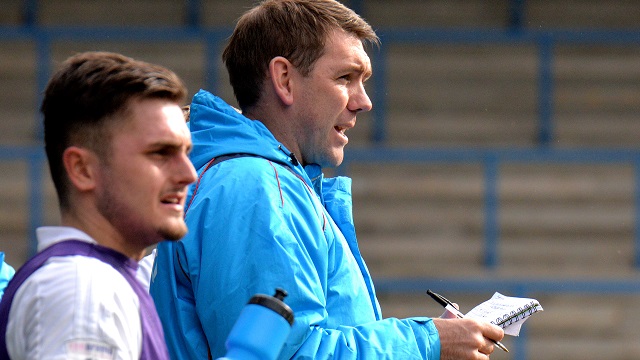 “Win and title is ours” – Chally

AFC Fylde manager Dave Challinor admits the equation this weekend is very simple … win and his league leaders are champions.

The Coasters are four points clear of second-placed Kidderminster Harriers with just two National League North games remaining and know that victory at Boston United on Saturday would seal the title.

Despite watching his side stutter against Bradford Park Avenue last time out, Challinor now has his eyes firmly set on the ‘biggest prize’.

Challinor said: “We are where we had hoped to be at the beginning of the season, although we would have preferred a better result against Bradford to put us in an even stronger position.

“There was obviously a bit of doubt on Saturday as to whether us winning would have clinched the title and as it worked out we couldn’t have done.

“The situation is totally in our control now and we know that if we win on Saturday then the title is ours.

“It will be a great game to be involved in and a second opportunity for us to go and clinch it.

“Our sole focus is winning the game and there is no bigger prize waiting for us at the end of it.

“We have been top of the league since September and we have been there to be shot at. Teams naturally are going to be tight and organised against us and that means we have to create our own opportunities and we have done that. We have scored over 100 goals and on occasions we have had to grind out results.

“At the end of the day we are in a deserved position at the top of the league and now we have to go and finish it off.”

Whilst there are several permutations that would see Fylde crowned champions this weekend, Challinor wants to keep full control over the outcome.

“I’m not overly fussed how we achieve promotion but we can only affect our own result. If we don’t win the game and the other result goes our way then I’d absolutely take it but we would by far prefer to win to keep it out of anyone else’s hands.

“Boston are a decent side on a good run and the pitch again won’t be fantastic, but we go there with everything to play for and we have to show that we deserve the prize.

“When you get within touching distance, of course the nerves start to creep in, but ultimately it’s just another game. We have to back the ability that we have because we are in this position for a reason.”

However, Challinor admits he is still wary of the threat that Boston will pose: “The new manager has come in and got them really well organised defensively and they will be difficult to break down. He has got them picking up results so I’m expecting a really tough game.

“There is an honesty about players throughout English football, regardless of whether their team has anything to play for or not. One thing they are playing for is their future.

“As a footballer, the last thing you want is another team celebrating in front of you on your own turf so that will be a big motivation for them and we are not expecting them to just roll over.”