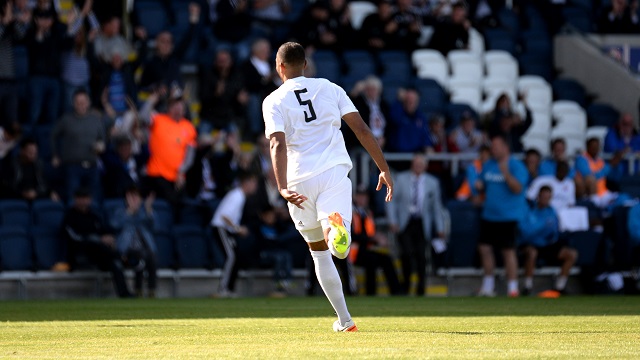 The grand opening of Mill Farm at the weekend was a memorable day for everyone connected with AFC Fylde, however one man will have an extra special reason to celebrate the occasion.

Summer signing Steve Williams made his debut in the 1-1 draw against Brackley Town after missing out on the opening day trip to AFC Telford United through injury.

The 29-year-old defender’s day was topped off when he rose to head home the equalising goal – the first ever at Mill Farm – as the Coasters earned a point in front of 1,365 supporters.

“It is brilliant for me personally to get the first Fylde goal at the new stadium,” said Williams.

“Of course we would have liked to win the first game here too, but we had had to settle for a draw.

“We are still unbeaten though after a couple of games and that’s a run we want to keep going for as long as possible.”

Williams was in the wars again after taking a nasty blow to the eye during the showpiece event, however the former Bradford City man believes he is getting back to full fitness after a stop-start pre-season.

“I’ve had an injury for a couple of weeks and I sat out the first game so my fitness isn’t quite up to scratch but it will get better.

“Each game we will learn things and improve as a team but on a personal level it was great to make my debut and I will only get fitter and stronger as the season goes.”

The Coasters travel to relegated Altrincham tonight (kick-off 7:45pm) and Williams admits that his side still have a few aspects to work on ahead of the trip to Moss Lane.

Halifax Town currently sit top of the pile in the National League North and three points tonight would put Fylde level with the league leaders with seven points from a possible nine.

“There were plenty of little simple things that we need to work on when we get back into training. Things like keeping possession, organisation from set pieces – everything will get sharper as the games go by.

“It’s not easy to get back into the swing of things. You get your fitness back in pre-season but it’s nothing like playing league games.

“Overall I think the lads dealt with the pressure of the day well and showed good character to get back into the game.

“I think it’s more a point gained than two lost and as the manager said to us, if we win at Altrincham, it will look like a great point and that’s how we have got to view it.”