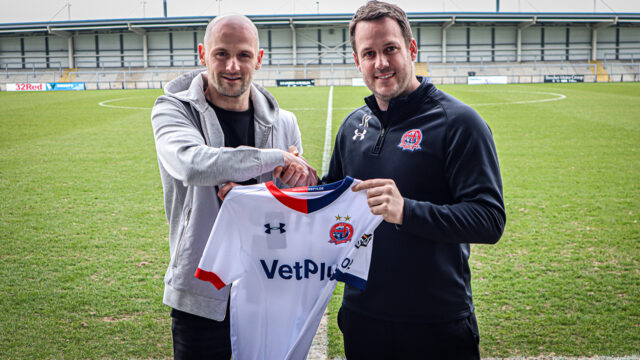 Will Hatfield Joins The Coasters!

AFC Fylde are delighted to announce the signing of Will Hatfield from fellow National League North side Darlington FC for an undisclosed fee, subject to FA and National League clearance.

Will joins the Coasters on a deal until June 2024, with James Rowe bolstering his side further ahead of tonight’s fixture against Spennymoor Town.

Hatfield started his career at Leeds United, with him coming through the youth system at Elland Road, where he was an unused sub in their FA Cup fourth-round tie against Tottenham Hotspur

Will, as part of his development at Leeds, then enjoyed loan spells at York City, Accrington Stanley and Lincoln City

The 30-year-old impressed Accrington enough to be signed on a full-time basis, making 84 appearances, which included scoring against the Coasters in an FA Cup tie back in 2012.

Guiseley came calling for Hatfield in the summer of 2015, and it was there he impressed and added 144 appearances to his name but later left to join Darlington.

On Hatfield’s arrival, manager James Rowe said: “Will is a fantastic acquisition for the football club; not just for his on-field ability but also his leadership and experience.

“I’m sure, like every Fylde fan, we will enjoy having Will at this football club, and I look forward to seeing him pull on a Fylde shirt.”

Welcome to AFC Fylde, Will!

Hatfield will wear squad number 34 during his time at Mill Farm.