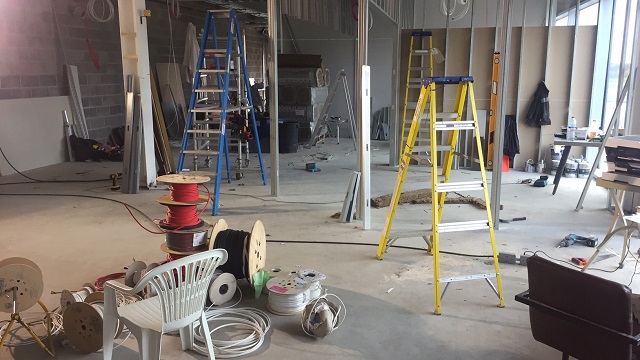 The next stage of building work at Mill Farm is the club offices, housing all of the AFC Fylde backroom team.

The space, to the right of the foyer in the main stand, will be divided up into a club shop, an open plan office for staff and two individual office rooms.

Work is well underway, with the partition wall to the club shop erected, whilst the steel frames for the two single offices are in place.

Work is expected to be finished before Christmas and we are very excited about getting everything (and everyone!) onsite here at this fantastic facility.

James Hardy has been called up to the England C squad for their upcoming fixture with Estonia U23s.

The Coasters’ winger has been rewarded for his superb form so far this season, scoring six goals and providing five assists as Fylde sit four points clear at the top of the Vanarama National League North.

In addition, Sam Finley and Josh Langley have both been included in Paul Fairclough’s contingency squad.

The Foundation have now announced a date for the official Open Evening to spread awareness about the innovative programme. It will take place on Tuesday 15 November at Churchills Restaurant, Mill Farm, between 6pm-8pm. This will be the first opportunity for all 16-19 year olds to find out everything there is to know about the Futsal programme.

The open evening will give people a chance to meet the team from AFC Fylde Community Foundation, ask questions and get a clear understanding of the benefits of the highly successful programme.

For any enquiries regarding the Futsal programme please contact Futsal lead Ryan Vaughan on 07834 733428 or alternatively email him at ryan.vaughan@afcfylde.co.uk

The Kellamergh Park record was broken on the opening day of this season against Brackley with an attendance of 1,365, but this was smashed three weeks later against Salford City before being broken again four days later against Halifax Town.

Saturday’s attendance of 1,935 was the best yet and we hope to break through the 2,000 barrier very soon!

As you can see above, we have the fifth highest attendance average in the league … not bad for little old Fylde!