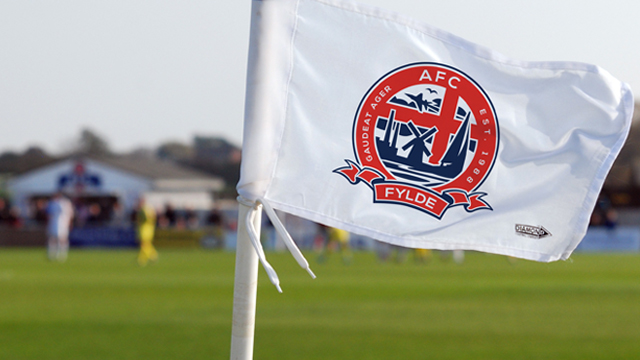 AFC Fylde went five points clear at the top of the Vanarama Conference North with a win over Gainsborough last weekend, but what else happened in the division?

Barrow climbed back up to second place with a comprehensive 5-0 win over struggling Gloucester City. Jason Walker scored a 15 minute hat-trick to put the gloss on an impressive performance by the Bluebirds who had taken the lead through goals from Harvey and Sheridan.

Dayle Southwell’s hat-trick helped Boston United overcome Hyde at York Street. Boston took the lead just after half time and were 3-0 up after 73 minutes before Conchie pulled a goal back for the division’s basement side. Boston are up against the Coasters at York Street next whist Hyde travel to Solihull Moors.

Brackley Town and Tamworth played out a dull 0-0 draw, a result which doesn’t help either side in their bid for safety. Brackley sit 16th whilst Tamworth remain 20th, with just one win all season.

Stockport cemented their place in the top six after a comfortable away victory at Leamington. Goals from Scott Spencer and Chris Churchman gave the Hatters a 2-0 lead within half an hour and the visitors held on for the three points which takes them within three points of the top two. Leamington remain in mid table in 13th.

Lowestoft came from behind to put their recent poor form aside to beat in form Oxford City. The visitors went infront after 4 minutes through Isaac before goals from Jake Reed and Chris Henderson gave the home side the lead before half time. Lowestoft now sit 14th whilst Oxford remain 4th.

North Ferriby and Guiseley played out an amazing 4-4 draw.North Ferriby took the lead through King and although Samuel Denton gave the home side the lead again Boyes’ second pulled Guiseley level. Quickfire second half goals from St Just and Tom Denton gave Ferriby a 4-2 lead before Lowe and Johnson goals tied the game at 4-4 with just 5 minutes to go. Both sides stay where they are in the table.

Chorley lost ground on AFC Fylde after blowing an early lead at Solihull Moors. James Dean gave the Magpies the lead before goals from Rob Elvins, Omar Bogle and Darryl Knights sealed the win for Solihull.

Colwyn Bay claimed a win at Stalbridge thanks to early goals from Hopley and Stevens before Malbon pulled a goal back for the hosts. Colwyn Bay climb up to 11th whilst Stalybridge are now looking over their shoulders at the bottom two in 19th.

Nick Wright and Jordan Murphy scored to give Worcester a 2-0 win at home to Harrogate Town. Worcester are now in the top 10 whilst Harrogate are 18th.