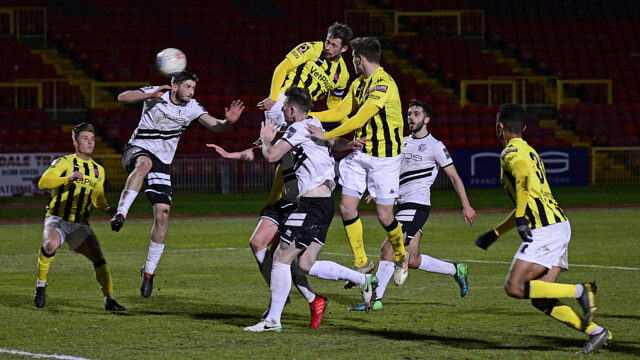 Our next team ‘under review’, is Gateshead.

The season being curtailed on PPG, meant that Gateshead’s play-off place was confirmed. They played against Brackley Town, winning a dramatic penalty shoot-out following a 1-1 draw in the eliminator round.

That meant they progressed to face Boston United in the semi-final. To say that was a thriller would be an understatement. The Heed lost out in an eight-goal thriller, going down 5-3 but it was a season to remember for the club following previous tough times.

JJ O’Donnell – The long serving midfielder scored 9 goals in 19-20 as Gateshead’s promotion ambitions were eventually ended in the play-off semi finals by Boston United. He is a fan favourite at the International Stadium after recovering from a rare foot condition which almost forced him into an early retirement in 2015.

Mike Williamson – The veteran former Newcastle United centre back is player-manager with the Heed after initially signing in 2018 and has made over 70 appearances for the club.

Our last meeting was in April 2019, a terrific strike from Nick Haughton earning the Coasters a 1-0 win in the North East.

You can view the full head-to-head records, by clicking here!

The distance from Mill Farm to the Gateshead International Stadium is 142.6 miles via the M6 motorway and would take 2 hours and 30 minutes to drive.